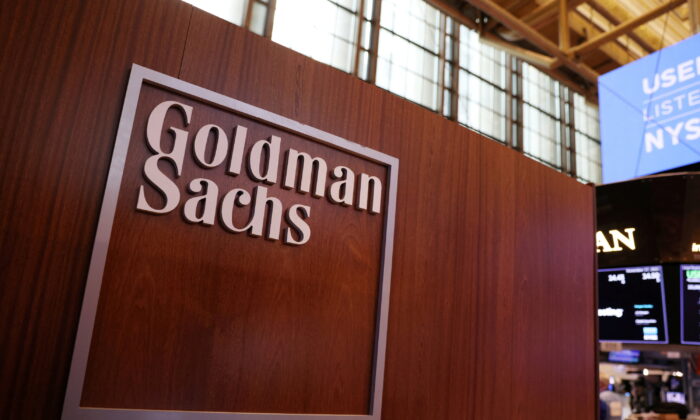 The logo for Goldman Sachs on the trading floor at the New York Stock Exchange in New York City, on Nov. 17, 2021. (Andrew Kelly/Reuters)
Europe

European Gas Prices to Drop by Half This Winter: Goldman Sachs

In a new note to clients, Goldman Sachs analysts said European gas prices could drop by half within the next six months, owing to EU efforts to prevent shortages ahead of what is expected to be a colder than average winter.

Analysts expect European wholesale natural gas prices to drop from about €215 ($214) per megawatt-hour (MWh) to below €100 ($99) per MWh by the end of the first quarter of next year, provided that winter conditions remain relatively normal.

The more positive outlook comes despite Russian energy giant Gazprom announcing that it is extending its shutdown of the Nord Stream 1 (NS1) pipeline, with no official reopening timeline provided.

Goldman Sachs analysts said: “The indefinite reduction in NS1 exports to zero leaves northwest Europe without any Russian gas going forward. And while we often hear the question of what this will do to storage, we believe a better approach is to ask what this will do to prices, so that storage continues to build as needed.”

“This is the puzzle Europe has successfully solved for the past year, with a combination of gas demand destruction within Europe and across [liquified natural gas] buyers elsewhere in the world, resulting in above-average inventory builds.”

Analysts added that they expected storage facilities to be 90 percent full on average by the end of next month. EU officials have set a target of a minimum of 80 percent storage level by Nov. 1.

‘Market Relief’ on the Horizon

According to the latest data compiled by industry group Gas Infrastructure Europe, overall storage levels in the EU are just over 84 percent.

Goldman said it expects storage facilities to remain over 20 percent full by the end of March next year.

“This, in our view, will set the stage for the sense of urgency to destroy demand we see currently, to be gradually replaced by a sense of market relief for having made it through winter,” analysts wrote.

EU countries have been weaning themselves off Russian gas following its invasion of Ukraine earlier this year; however, demand is still running high, and prices are soaring, prompting fears of an unprecedented energy crisis this winter.

Along with shoring up supplies in recent months, the European Union is set to unveil a series of measures aimed at bringing down prices on Sept. 14.

They include a proposal for targets that countries should meet to reduce electricity demand and ensure that non-gas power producers share their excess profits from this year to help struggling consumers, Politico reports.

On Sept. 11, U.S. Treasury Secretary Janet Yellen warned, during a Sunday appearance on CNN’s “State of the Union,” that American consumers could face a spike in gas prices this winter when the EU moves to significantly cut back on buying Russian oil, noting that officials hope to ban Russian oil tanker shipments to Europe.