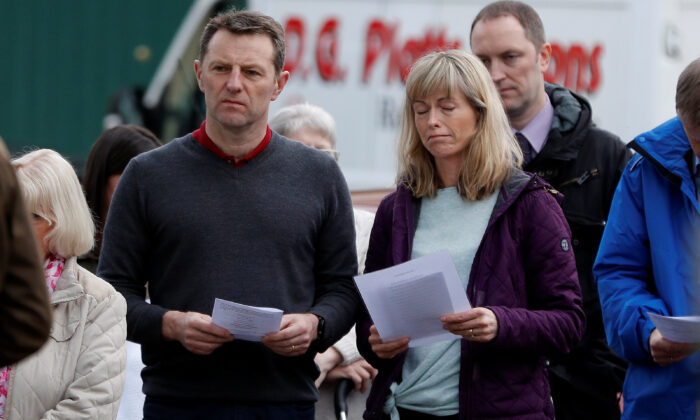 Kate and Gerry McCann attend a service to mark the 11th anniversary of the disappearance of their daughter Madeleine from a holiday flat in Portugal, near her home in Rothley, Britain, on May 3, 2018. (Darren Staples/Reuters)
Europe

PARIS—The European Court of Human Rights (ECHR) ruled on Tuesday against the parents of missing British toddler Madeleine McCann, saying that Portugal had given them a fair hearing in their libel battle against a former Portuguese policeman.

The police officer, Goncalo Amaral, who worked on the investigation into Madeleine’s disappearance in 2007 on a family holiday in Portugal, suggested in a book he authored, “Truth of the Lie,” that the youngster’s parents had been involved.

Kate and Gerry McCann sued Amaral for libel. In 2015, a Portuguese court ruled in their favor, ordering Amaral to pay them damages. Two years later the ruling was reversed by Portugal’s highest court.

The parents then appealed to the European court, arguing that their right to a fair trial, right to private family life, and freedom of expression had not been upheld by Portugal.

The ECHR ruling said the Portuguese judiciary had not failed in its duty to protect the rights of the McCanns and that their arguments concerning presumption of innocence were ill-founded.

“Even assuming that the applicants’ reputation had been damaged, this was not on account of the argument put forward by the book’s author but rather as a result of the suspicions expressed against them,” the ECHR ruled.

Amaral told Reuters the decision was “a victory for justice and the Portuguese justice system and for all those who fight for freedom of expression and opinion.”

Kate and Gerry McCann said they were “disappointed” with the decision in a statement via lawyer, Ricardo Correia Afonso, but added that “much has changed” since they started the proceedings. The lawyer said they would not appeal.

“We took action for one and only one reason: Mr Amaral’s unfounded claims were having a detrimental impact on the search for Madeleine,” the statement said.

“The focus is now rightly on the search for Madeleine and her abductor(s). We are grateful for the ongoing work by the British, German and Portuguese police.”

Madeleine McCann was three-years-old when she vanished in May 2007 from her bedroom in the Algarve apartment her family were staying in.

The parents were questioned by police as formal suspects that autumn. The following July, the Portuguese police dropped their investigation citing a lack of evidence, and cleared them of any involvement.

They have campaigned tirelessly to draw attention to their daughter’s disappearance, and British public figures from business tycoons to authors and soccer stars have made appeals for information.

In May, the German prosecutor investigating the case since 2020 said new evidence potentially incriminating a convicted child abuser, who is imprisoned for raping a woman in the same area when Madeleine went missing, had been found.