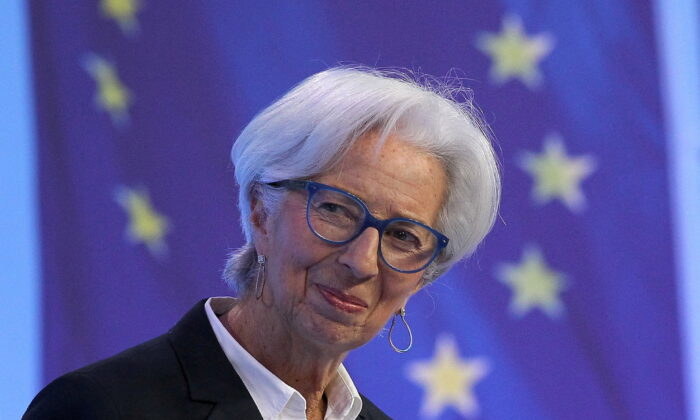 The European Central Bank announced on June 9 an end to its decade-long loose monetary policy with a series of interest rate hikes starting next month to tamp down on high inflation throughout the bloc.

The central bank will terminate its previous bond purchasing policy, the Asset Purchase Programme, which was the bank’s main stimulus tool since the eurozone debt crisis, and will start increasing interest rates, first with a quarter-point hike in July, followed by a larger one in September.

ECB officials are still debating over how aggressive the bank should be on inflation, with many board members pushing for a half-point hike at the next meeting, similar to the recent move by the Federal Reserve.

The rapid rise in prices is hitting the European economy hard and is threatening to spiral into a financial crisis.

Skyrocketing energy costs driven by Russia’s conflict with Ukraine are hurting households across Europe, with governments spending billions of euros to stem the price rise.

The ECB expects medium-term inflation to be above or at target through the rest of the year, as the economy slows due to price pressures caused by the conflict.

Inflation in the eurozone rose to a record-high 8.1 percent last month and is continuing to rise.

“If the medium-term inflation outlook persists or deteriorates, a larger increment will be appropriate at the September meeting,” said ECB chief Christine Lagarde.

The central bank is predicting price growth averaging 2.1 percent in 2024, ahead of its 2 percent target.

Lagarde said that the ECB’s deposit rate now stands at minus 0.5 percent and that the rate would be raised to zero or slightly above by September.

The central bank has not raised interest rates in 11 years and the deposit rate has been in negative territory since 2014.

The bank chief said that the new policy will be flexible under stressed conditions and that the ECB will be committed to reinvesting proceeds from maturing bonds held under its Pandemic Emergency Purchase Programme in the event of another crisis.

“There is no specific levels of yields increase, or lending rates or bond spreads that can unconditionally trigger this or that,” said Lagarde, regarding on when such flexibility would kick in.

“We will determine on the basis of circumstances, of countries, how and when that risk is likely to materialize and we will prevent it,” she continued.

Markets are predicting an aggressive rate hike of 135 to 150 basis points by the end of December, with moves in excess of 25 basis points at every meeting from July onwards.

Forecasts for annual real GDP growth in the eurozone were cut to 2.8 percent for 2022 and down to 2.1 percent over the next two years.

Barclays is predicting a mild recession in the EU this fall, after spending during the summer vacation season winds down.

The recent World Bank and Organisation for Economic Co-operation and Development forecasts are raising fears of stagflation, as the war in Ukraine weakens investor confidence and supply-chain disruptions in China continue to cause delays in manufacturing.