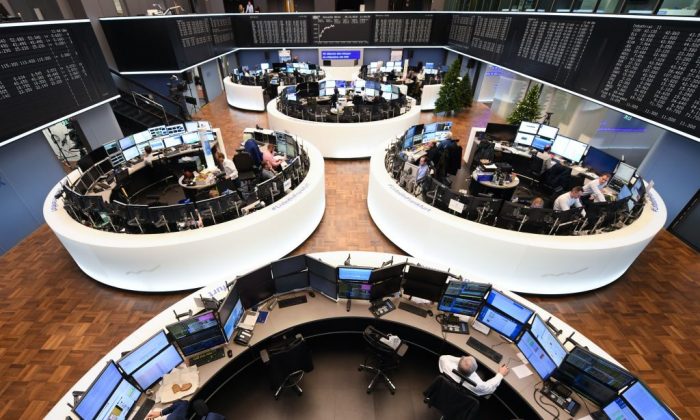 Traders work in front of a board displaying the chart of Germany's share index DAX (background) at the stock exchange in Frankfurt am Main, western Germany, on Dec. 28, 2018. (Arne Dedert/AFP/Getty Images)
Inflation

Eurozone inflation hit a new record high of 5 percent in December 2021, raising more questions about the competency of the European Central Bank’s (ECB) monetary policy, which claimed that inflation was transitory.

Inflation rose unexpectedly last month, making things more uncomfortable for the ECB authorities, who have consistently underestimated price pressures and the heavy criticism from some of its own policymakers.

The 19 countries in the Euro bloc saw inflation rise to 5 percent from 4.9 percent in November, far higher than analysts’ expectation of 4.7 percent.

Higher energy prices, which are up 26 percent compared to the previous year, remained the main cause of inflation.

Increases in the price of food, services, and imported goods were also well above the ECB’s overall inflation target of 2 percent, according to data from Eurostat.

Its last internal forecast in December optimistically put future inflation at 1.8 percent in both 2023 and 2024.

The central bank said at the time that it still did not see a need to lift interest rates in 2022, unlike the U.S. Federal Reserve with its more hawkish monetary stance.

“Monetary accommodation is still needed for inflation to stabilize at the 2 percent inflation target over the medium term,” said the ECB before the recent report.

The ECB in December did curb its monthly asset purchases but vowed to continue to push stimulus spending in 2022.

The banking authorities may be forced to change their tune when the ECB’s Governing Council next meets on Feb. 3, if inflation continues to accelerate.

However, no policy action from the ECB is expected before March.

“If inflation were to spring further and persistent upside surprises, central banks might be forced to step on the brakes hard,” said analysts at Germany’s Berenberg Bank to CNBC.

The ECB could prepare the ground for a first hike in the spring of 2023, said Berenberg.

The bank now expects the inflation rate to overshoot the bank’s target in 2022, but at the rate of 3.2 percent.

European banking experts believed that with the economy making a strong recovery from the shock of the 2020 pandemic, the rise in inflation a few months ago would ease off by the end of the year.

The supply-chain bottlenecks and the ensuing inflation have curtailed consumer spending on retail products, with more expenditures on food and other necessities.

Experts notice that inflation excluding food and fuel prices in the Euro bloc rose to 2.7 percent in December from 2.6 percent, while figures excluding alcohol and tobacco products held steady at 2.6 percent.

Several analysts have already stated that the Eurozone may have reached a peak in inflation.

However, there is disagreement on how fast inflation will decline and where it will bottom out when the economy stabilizes.

Optimistic European policymakers believe the jump in inflation to be temporary and that price pressures should ease eventually.

However, some influential policymakers question the standard narrative, warning that risks are skewed toward higher figures and that above-target inflation could persist into 2023.

European wage growth is weak, while the Omicron surge may crimp economic activity and weigh on inflation.