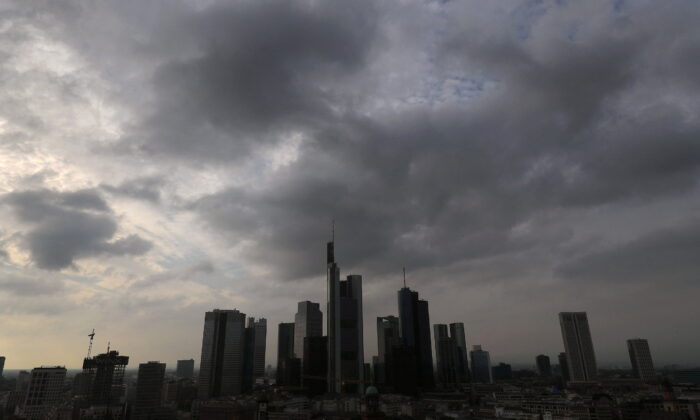 Dark clouds are seen over the skyline with its bank towers in Frankfurt, Germany, on Oct. 23, 2016. (Kai Pfaffenbach/Reuters)
Stocks

LONDON—European bank stocks tumbled again on Monday as more financial firms cut ties with Russia and others braced for further impact from the country’s invasion of Ukraine.

Lenders and investors with links to Russia have been cutting ties to the country as Western sanctions have been brought to bear, while others have sought to reassure their shareholders that the direct impact could be contained.

Carmignac said it would not buy Russian securities and would divest from existing assets, while EY said it was axing links with operations in Russia following similar moves by rivals KPMG and PwC.

The escalating crisis is also causing upheaval at the top of companies, with multiple board members at Russian firms including the British chairmen of gold and silver producer Polymetal and metals and hydropower group En+ quitting.

The London Stock Exchange separately said it had canceled some trades in Polymetal after shares surged by over 700 percent at one point on Monday.

Russian banks targeted by sanctions have been scrambling to adapt. VTB’s consumer digital bank in Europe has turned off its phone lines due to high call volumes, according to a notice on its website on Monday.

One of France’s major banks Credit Agricole became the latest to detail its exposure to Russia and Ukraine, saying this stood at around 6.4 billion euros ($6.95 billion) in total across on and off balance sheet exposures.

The lender said the exposures were of a “limited size and of good quality” and were being closely monitored, adding they would not impact distribution of its 2021 dividend.

The eurozone banking share index dropped by as much as 9.5 percent to a 13-month low in early trading on Monday, before paring losses. It was down 2.8 percent by 1422 GMT.

Bank stocks have fallen sharply as the crisis worsened, with investors preparing for the economic cost of the conflict.

Lenders with operations in Russia–including Austria’s Raiffeisen, Italy’s UniCredit, and France’s Societe Generale–have been particularly affected, and all three saw double digit percentage falls early on Monday. The trio recovered some ground later and were all down around 3–4 percent in early afternoon European trading.

The United States and Europe are mulling a Russian oil import ban, which analysts say could further stoke energy prices and inflation and dampen recovery. Britain said on Monday it was also considering a similar ban.