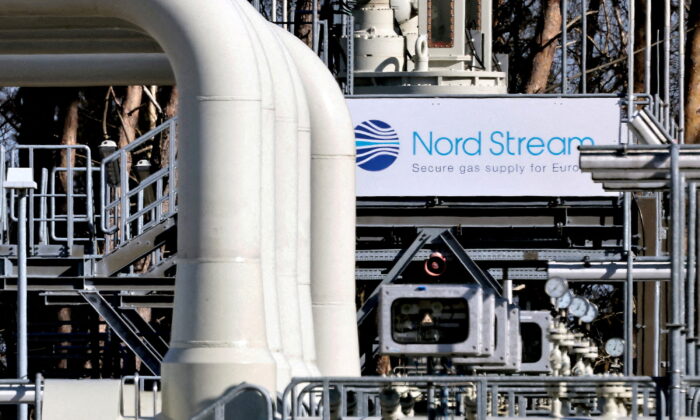 Pipes at the landfall facilities of the Nord Stream 1 gas pipeline in Lubmin, Germany, on March 8, 2022. (Hannibal Hanschke/Reuters)
Energy

Europe Races to Prepare for Energy Crunch This Winter

Berlin said it aimed to sign LNG contracts in the United Arab Emirates to supply terminals it is building, now that the vital Nord Stream 1 gas pipeline from Russia is shut, while Spain, France others outlined contingency planning to try to avoid power cuts.

“If everything goes well, savings in Germany are high and we have a bit of luck with the weather, we … have a chance at getting through the winter comfortably,” Economy Minister Robert Habeck said after a tour of a future LNG terminal in northern Germany.

The sharp drop supplies from Russia, which previously supplied about 40 percent of the European Union’s gas needs, has left governments scrambling to find alternative energy resources and has prompted fears of possible power cuts and a recession.

Russia has blamed Western sanctions imposed on Moscow for its invasion of Ukraine for hampering pipeline deliveries. European politicians say Moscow is using energy as weapon.

Germany’s RWE said it was “in good and constructive talks” with Qatar about LNG deliveries, before a planned visit by Chancellor Olaf Scholz to the Gulf. Ailing importer Uniper said it had not reached a deal yet.

Germany will also be able to count on gas flowing from France from around Oct. 10, the head of France’s CRE energy regulator said, following an announcement by President Emmanuel Macron that the two would help each other with energy supplies.

Although deliveries via the Nord Stream 1 have halted, Russian gas flows to Europe via Ukraine, although much reduced, have continued.

“But there will be no gas cuts for households. Never,” she told franceinfo broadcaster.

Across the Pyrenees, Spanish Industry Minister Reyes Maroto said obliging energy-intensive companies to close during consumption peaks was an option this winter if required.

The companies would be compensated financially, she said in an interview with Spanish news agency Europa Press, adding there was no need to impose such closures now.

And Finns were warned by national grid operator Fingrid that they should be prepared for power outages.

Reflecting the disruptions caused across the continent, Finnish power retailer Karhu Voima Oy said it had filed for bankruptcy due to a sharp rise in electricity prices.

The German economy is contracting already and will likely get worse over the winter months as gas consumption is cut or rationed, the country’s central bank said on Monday.

In Portugal, the government was blunt about its concerns.

“From one day to another, we may have a problem, such as not being supplied the volume of gas that is planned,” environment and energy minister Duarte Cordeiro said, adding that Portugal was working to diversify its supplies to boost energy security.

“Portugal has been preparing, like all of Europe, for what will be a difficult winter,” he said, urging the European Commission to move forward with plans for a joint EU gas purchasing platform and defining import prices.

Russia, which had supplied about 40 percent of the European Union’s gas before its February invasion of Ukraine, has said it closed Nord Stream 1 because Western sanctions hindered operations. European politicians say that is a pretext and accuse Moscow of using energy as a weapon.

German buyers briefly reserved capacity on Monday to receive Russian gas via the Nord Stream 1 pipeline, once one of Europe’s major gas supply routes, for the first time since the line was shut three weeks ago. But they soon dropped the requests.

It was not immediately clear why buyers had submitted requests for capacity when Russia has given no indication since it shut the line that it would restart any time soon.

‘Going Back in Time’

“Stocks are set to continue to be built further, supported by the finalization of planned maintenance work and increasing Norwegian flows as of this week,” analysts at Energi Danmark said in a morning note.

Europe’s imports of thermal coal in 2022 could be the highest in at least four years, analysts said.

“Europe is going back in time,” Rodrigo Echeverri, head of research at Noble Resources, told a conference.