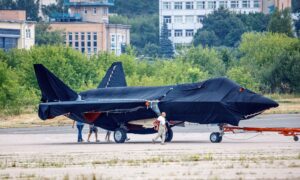 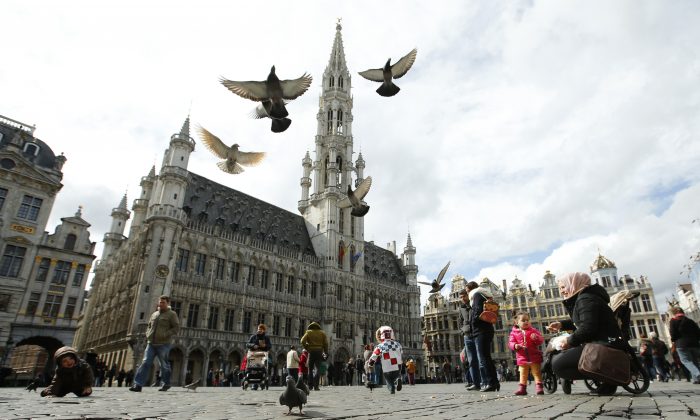 Pigeons take flight as tourists feed them in the Grand Place in Brussels on March, 28, 2016. The Belgian health minister says four of those wounded in the suicide bombings last week have died in the hospital. (AP Photo/Alastair Grant)
Opinion

BRUSSELS—The terrorist attacks in Brussels on March 22, following those in Paris last November, mark a turning point in the modern history of Europe. The European Union had already been weakened by a perfect storm of crises—the hemorrhaging of the eurozone, the Russian invasion of Ukraine, a biblical tide of Middle Eastern refugees, and the growing threat of “Brexit.”

A terrorist sanctuary in the Molenbeek neighborhood of Brussels, the very heart of Europe, only underlines the grim reality that the European Union must adapt to new forces transforming global politics or risk the fate of previous imperial experiments to unite the continent, all of which ended in failure.

Critics go too far when they call Belgium the Afghanistan of Europe, though both Belgian and European authorities underestimated the dangers posed by what the BBC calls “gangster jihadists”—criminal young men radicalized by the war in Syria who used Brussels, where one-quarter of the population is Muslim, as a base of operations for a string of attacks in Europe.

More broadly, it appears that leaders intent on building Europe into a “post-modern” superpower have their priorities wrong—a fundamental shift to make Europe secure and geopolitically competitive is essential to sustain the viability of the European Union.

Europeans need to wake up to geopolitics—positioning their union to master these rather than be a victim. After the terrorist assault of Sept. 11, 2001, the United States dramatically increased intelligence and military spending; it created the Department of Homeland Security, broke down barriers between the internal (FBI) and external (CIA) security services, and enacted the Patriot Act to enable effective surveillance of potential terrorists. The nation leveraged military force and local allies to end what at the time was the world’s largest terrorist sanctuary, in Afghanistan, assembling a globe-spanning coalition to defeat al-Qaeda, and threatened war with Pakistan if its leader did not join the campaign.

Critics accused the United States of overreach with its “war on terror,” including the  invasion of Iraq, but that outcome was certainly preferable from the U.S. perspective to further attacks on American cities.

Europeans must position their union to master and influence geopolitics rather than be a victim.

By contrast, Europe barely has a grip on its terrorist problem. Rampant homegrown jihadism was not created without context. Rather, it germinated in the fertile soil of the conflict in Syria, which spawned the Islamic State (ISIS) terror group, and inspired the Paris and Brussels attacks. Thousands of young European men traveled to Syria to fight and have returned home, radicalized, to segregated ethnic enclaves in European capitals. Many more European Muslims have not fought on the ISIS front, but are mobilized, falling prey to the terrorist group’s effective use of propaganda, including claims that it is defending its “caliphate” against morally debased Westerners and those of apostate Arab regimes. More recently, ISIS has enjoyed sanctuary in Libya, following a European-led intervention followed by retreat rather than prudential investments in nation-building.

Yet no European country is pushing for decisive action to address the conditions in the wider Middle East that export terrorism into the continent. France came the closest when it prepared to join the United States in attacking Bashar al-Assad’s regime in Syria in 2013. But when President Barack Obama walked back from his own “red line” over the regime’s use of chemical weapons against Syrian civilians and deferred military action, Europeans decided that they could not act alone.

European leaders cannot tend a garden at home while the wilderness around them burns.

European leaders cannot simply tend a garden at home while the wilderness around them burns; they must pursue a shaping strategy to the south that addresses the conflicts producing both domestic terrorism and a refugee crisis that threatens to overwhelm their own citizens’ tolerance. This is also true of the crisis to Europe’s east, where the Russian invasion of Ukraine was precipitated by a decision by Ukrainian leaders to pivot west toward Europe and away from Moscow’s embrace. Russian forces regularly challenge NATO defenses. The wolf is at the door, yet most European nations still do not meet the NATO standard of spending 2 percent of GDP on defense.

By default, this leaves European security mainly in the hands of the Americans, whose military spending accounts for three-quarters of the NATO total. The U.S. security guarantee has created a cocoon in which Europeans constructed an economic and political union while neglecting dangers from without and within.

To get a grip on the multiple security crises, European leaders must return to the world of great power competition. This does not mean a rerun of military mobilization, in the style of “Guns of August” and the early onslaught of World War I. It does mean expanding national and joint capabilities and demonstrating strategic initiative to deal with dangers that risk ripping the current European order apart at the seams, as another crisis threatened the European order of 1914.

The impressive mandarins who run the European Commission and other EU institutions have done much to make Europe economically competitive and improve public welfare. They have built the world’s largest common market and trading economy, making the EU an economic superpower. Together with national leaders, they have ensured that most European citizens enjoy cradle-to-grave welfare and health benefits, the world’s most generous. They have dramatically improved the lives of citizens through measures like the Schengen zone of visa-free travel and deregulation of airline markets to render affordable Mediterranean vacations for the masses.

The EU built the world’s largest common market and must take the same approach to security.

It is now time for EU and elected national politicians to take the same zealous, systematic, and enlightened approach to European security. The immense gains in public welfare produced by European integration are unsustainable if people feel threatened by the continuing risk of violent death in their home cities. Not only will terrorists corrode the spirit of liberalism and openness on which the European Union relies; predatory great powers will take advantage of European weakness to nibble away the continent’s security perimeter, as Russia already has done effectively in Georgia and Ukraine and may yet do in the Baltic states. Meanwhile, to the east, China and other Asian giants are on the march, already eclipsing European states in national power and geopolitical ambition.

As Donald Trump, the leading Republican presidential candidate, has shown by disparaging the NATO alliance—and as Obama has done by condemning America’s closest European allies as free-riders—the United States may not always come to Europe’s rescue. Despite a circus-like presidential campaign, the United States is well-placed to compete in the 21st century, thanks to a dynamic economy and culture of entrepreneurship, its demographic self-renewal through highly skilled immigration, dominance in military and technological power, a global network of alliances, the domestic energy revolution, and splendid geographic isolation that positions potential great power competitors far from its shores.

In the wake of the attacks in Brussels and Paris and daily revelations about thriving jihadi networks on the continent, European leaders must find a formula in which they can say the same about the European Union—enabling them to project influence abroad shape the international system, infusing it with liberal values rather than hunkering down at home, trying to defend their people and ideals from extremists committed to destroying them from within.

Daniel Twining is director and senior fellow for Asia at the German Marshall Fund of the United States, which has a large office in Brussels. Copyright © 2016 YaleGlobal and the MacMillan Center. This article was originally published on YaleGlobal Online.