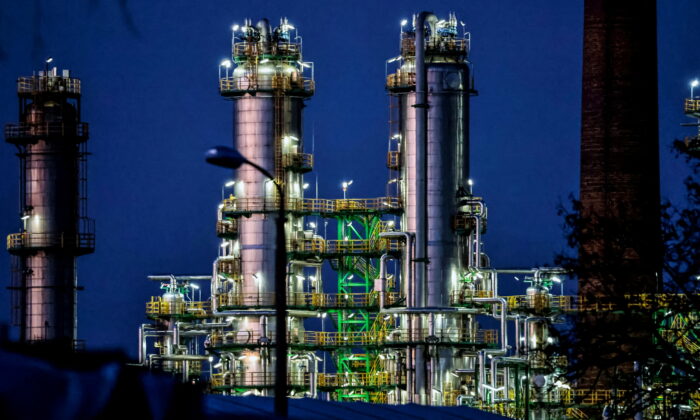 The European Union is seeking to scale down its reliance on Russian gas imports while seeking help from the United States, European Commission President Ursula von der Leyen told EU lawmakers on March 23.

Stressing that “energy policy is also security policy,” von der Leyen pointed out that the commission has proposed measures that will allow for Europe to “significantly reduce” the region’s gas imports from Russia. “This is very ambitious. But we can achieve it. We have already set a clear path to do this,” she said.

“With our new proposal REPowerEU, we can speed up this transition even more. First, by fast-tracking renewable projects … including hydrogen and biogas. Second, by speeding up investment in energy efficiency … And third, by diversifying our gas supply away from Russian gas towards reliable suppliers.”

REPowerEU is dependent on two pillars, according to a European Council press release. The first involves diversifying gas supplies through higher liquefied natural gas (LNG) and pipeline imports from non-Russian suppliers. The region will also seek to boost the production and import of biomethane and renewable hydrogen. Secondly, it involves reducing the dependence on fossil fuels in Europe by boosting energy efficiency, resolving infrastructure bottlenecks, and so on.

REPowerEU seeks to phase out the bloc’s dependence on Russian fossil fuel-based energy by 2030. If fully followed, the plan allows the EU to remove at least 155 billion cubic meters (bcm) of fossil gas by the end of the decade, which would be equivalent to the volume of gas imported from Russia last year. Roughly two-thirds of the reduction can potentially be achieved in a single year.

Von der Leyen also intends to talk with President Joe Biden on prioritizing LNG deliveries from the United States in the coming months.

“We are aiming at having a commitment for additional supplies for the next two winters,” she told lawmakers.

Biden will be meeting with European leaders at the NATO summit on March 24. The president will discuss with European counterparts ways to secure the continent’s energy security, White House national security adviser Jake Sullivan told reporters. He suggested that Biden might make relevant announcements on Friday morning along with von der Leyen.

Washington is currently diverting cargoes to increase the supply of U.S. LNG to Europe in the immediate term, Sullivan said in a March 23 press briefing. “I think you can expect that the U.S. will look for ways to increase LNG supplies, surge LNG supplies to Europe not just over the course of years, but over the course of months as well. Of course, that amount will grow over time,” Sullivan said.

Europe’s imports of U.S. LNG have seen an increase in recent times. In February, the region remained the top importer of U.S. LNG for the third consecutive month, taking in roughly three-quarters of all exports, vessel tracking data from Refinitiv showed. Second-placed Asia only accounted for 15 percent of the exports. With Europe looking to detach itself from Russian energy supplies, the demand for U.S. LNG is expected to increase.

At the NATO summit, European leaders are expected to discuss Russia’s demand to pay for gas imports in rubles. If followed through, it could undermine EU sanctions slapped on the country in the aftermath of Moscow’s invasion of Ukraine.

EU nations are divided on the proposal of banning Russian energy imports. While countries like Latvia and Poland are urging a ban, Germany and Hungary are opposed to the proposal, arguing that such a decision would inflict considerable economic damage.