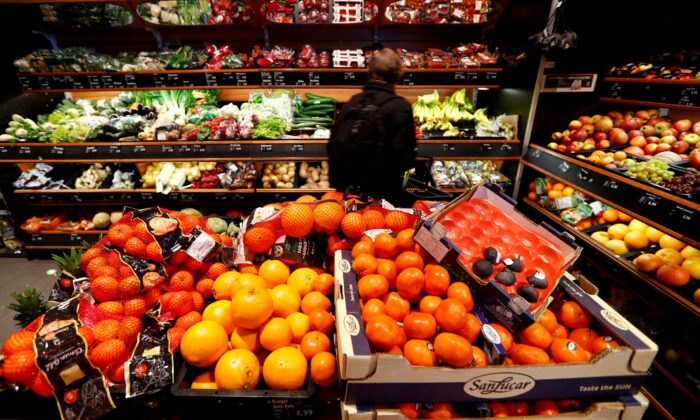 Full shelves with fruits are pictured in a supermarket during the spread of the coronavirus disease (COVID-19) in Berlin, Germany on March 17, 2020. (Fabrizio Bensch/Reuters)
Economy

LONDON—A key market gauge of euro zone inflation expectations rose on Friday to 2 percent, the ECB’s inflation target, for the first time in seven years, putting pressure on the central bank as it weighs how to proceed with stimulus when its pandemic-era support ends.

Shortages of workers, fuel, cargo ships, semiconductors and building materials as the global economy bounces back after pandemic lockdowns have left companies from electric car makers to chocolatiers scrambling to keep a lid on costs.

Euro zone inflation hit a 13-year high in September and the move in the bond market inflation expectations gauge is a likely focus point for the European Central Bank, which closely tracks it.

Florian Spaete, senior bond strategist at Generali Investments, expects the ECB to try to calm some of the inflation fears in the market at its policy meeting next week, also emphasizing that core inflation— which strips out volatile food and energy costs—remains low.

While Spaete said that breakeven inflation rates for the euro area had previously been too low and markets have done a good job pricing inflationary pressures, he added that “talking about the last few days (pricings) might get a bit ahead of themselves.”

“(Breakevens are) very much correlated with commodity prices and may be looking a bit at correlation with the U.S. market and U.S. inflation expectations, where the situation is a bit more tight looking at the labour market for example, which you might say is broken.”

The five-year, five-year breakeven inflation forward has risen from just under 1.30 percent at the start of the year, driven by the economic recovery from the COVID-19 pandemic and elevated inflation readings spurred by supply bottlenecks and high energy prices.

Elsewhere, the German 10-year breakeven inflation rate, which represents the difference in yield between a nominal bond and its inflation-indexed counterpart, rose to around 1.86 percent, the highest since April 2013.

A similar gauge in the United States held at its highest level since August 2006 at 2.646 percent.

Later on Friday, S&P Global is due to review Greece’s credit rating, though analysts suggested that the agency will likely keep its BB rating intact.

Greece’s rating is particularly significant as it would fall out of the ECB’s bond purchase programme once the pandemic-era measures are removed unless it manages to obtain an investment grade rating by then.

By Yoruk Bahceli and Abhinav Ramnarayan