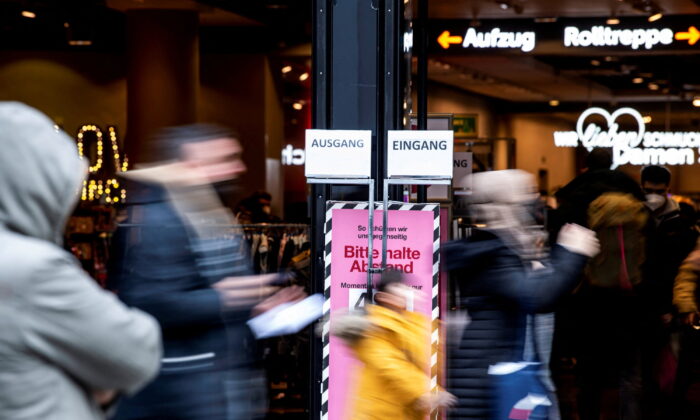 People walk past a store in the pedestrian zone in Munich, Germany, on Dec. 6, 2021. (Lukas Barth/Reuters)
Inflation

FRANKFURT—Eurozone inflation held steady at a record high 7.4 percent in April, driven by soaring fuel and food costs, the EU’s statistics agency said on Wednesday, lowering its estimate from a preliminary 7.5 percent.

Inflation has soared over the past year, first on post-COVID supply bottlenecks and latterly on knock-on effects from Russia’s war in Ukraine, which have pushed up prices of everything from raw materials to finished industrial goods.

Price presses are now so broad that even underlying inflation, which filters out volatile food and fuel costs, is well above the European Central Bank’s 2 percent target, indicating that high price growth is at risk of getting entrenched.

Inflation excluding energy and food accelerated to 3.9 percent in April from 3.2 percent in March while an even narrower measure also filtering out alcohol and tobacco picked up to 3.5 percent from 3 percent, Eurostat said.

This broadening of inflation is the main reason the ECB is almost certain to raise interest rates in July, kicking off what is likely to be a string of rate moves that could lift its minus 0.5 percent deposit rate back into positive territory before year-end.

ECB policymakers are increasingly worried that the inflation surge, once seen as just a “hump”, is now here to stay and it will take tighter monetary conditions to get it back under 2 percent.

The European Commission this week estimated 2023 price growth at 2.7 percent, suggesting that inflation will be well above the ECB’s target at least for three straight years.

A rise in services inflation to 3.3 percent from 2.7 percent is also likely to be concerning to policymakers, since services are labor-intensive and hence more likely to fuel wage pressures.

Rapid wage growth is a precondition of durable inflation but it is also a largely backward-looking indicator, suggesting that once the acceleration is under way, it becomes more difficult to rein in.

Among eurozone members, April inflation was highest in the Baltics, with the rate in Estonia exceeding 19 percent. It was lowest in France and Malta, both at 5.4 percent.