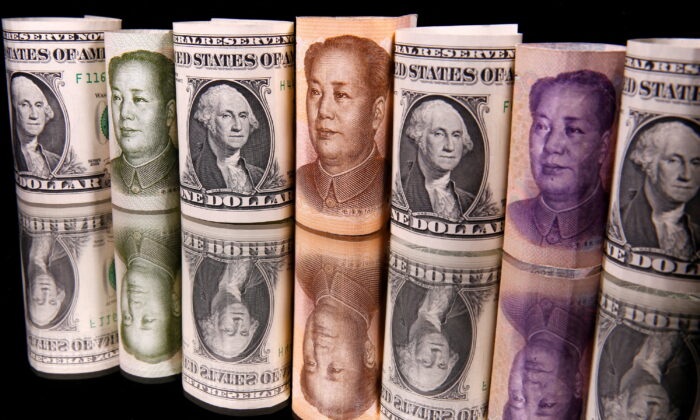 LONDON—The euro and sterling slipped to a one-month low versus the safe-haven U.S. dollar on Friday with investors worrying about further economic slowdown after Federal Reserve officials reiterated the need for higher rates.

The dollar index rose 0.2 percent to 107.69, after earlier touching 107.74, its highest since July 18. The gauge is on track for a 1.9 percent rally this week, which would be its best weekly performance in ten weeks.

Kansas City Fed President Esther George said she and her colleagues will not stop tightening policy until they are “completely convinced” that overheated inflation is coming down.

“The U.S. dollar is again on the front foot this morning supported by another round of hawkish Fed speak … the overall tone of Fed officials suggests that the Fed still has a lot of work to do to contain inflation,” said Jane Foley, head of FX strategy at Rabobank in London.

Weakening Chinese data this week and an energy crisis in Europe are raising fears of further economic slowdown, which also hit European currencies and supported safe-haven flows, Foley added. “We expect another break below parity,” she said.

The euro is on course to decline 1.7 percent since last Friday, which would be its worst week since July 8. Sterling is on track for its worst week in more than a year, set for a 2 percent drop.

British consumer sentiment in August fell to its lowest since at least 1974, a survey showed, as households feel “a sense of exasperation” about the soaring costs, as inflation hit double digits.

Interestingly, despite the Fed chorus on the need for higher rates, the odds of another supersized 75 basis point hike next month have receded to 45 percent in money markets.

Fed Chair Jerome Powell will update the market on his views at the annual Jackson Hole symposium on Aug. 25–27.

Against Asian currencies, the greenback rose to 136.76 yen, its highest since July 27. China’s yuan slipped to a three-month low of 6.8150 per dollar in onshore trading after the central bank set a much-weakened midpoint guidance, with traders expecting further downside due to an economic slowdown.

“The USD/CNY fix today above 6.80 was the highest this year and suggests that the PBOC will not cap its gains in the face of the climbing USD,” said Alvin Tan, a strategist at RBC Capital Markets.