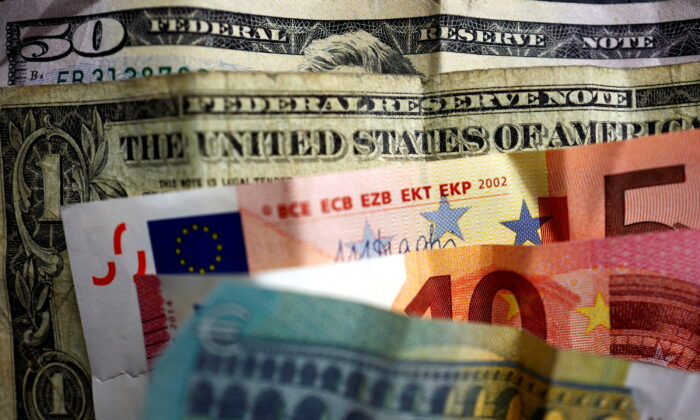 LONDON—The euro was within a whisker of a two-decade low on Wednesday amid growing recession fears fuelled by a possible energy supply crunch, while the U.S. dollar recouped some data-inspired losses after Tuesday’s softer-than-forecast data.

Disappointing U.S. services and manufacturing surveys released on Tuesday and a plunge in new home sales saw the dollar take a breather, after a run that pushed the U.S. currency to its strongest level against the euro in two decades.

But Europe has its own growth concerns, stemming from its greater exposure to Russian gas supplies as the region seeks to refuel ahead of winter.

Front-month Dutch gas, the benchmark for Europe, rose again on Wednesday as the prospect of a halt to supplies from the Nord Stream 1 pipeline kept investors on edge.

“The sharp jump in gas prices and the uncertainty about this going forward will continue to weigh on the euro for the time being,” said DNB Markets FX analyst Ingvild Borgen Gjerde, who noted that weaker risk appetite was also keeping the euro under pressure.

Eyes were now turning to Jackson Hole, Wyoming, where the Federal Reserve kicks off its annual symposium on Thursday with Fed Chair Jerome Powell due to speak on Friday.

The dollar index, which measures its performance against a basket of six currencies, was last up 0.37 percent at 108.95, within touching distance of July’s two-decade peak of 109.29.

“I think it’s going to be a knife-edge speech from Powell,” said Simon Harvey, head of FX analysis at Monex Europe.

“We roughly know where the Fed is currently spread on September’s meeting and they won’t want to box themselves in too much.”

Money markets are currently fully pricing in a 50 basis point rate increase at next month’s Fed meeting, with traders pricing in a greater than 50 percent chance of a larger 75 basis point hike, according to Refinitiv data.

Meanwhile, cyclical currencies such as the Australian and New Zealand dollars were under pressure amid fears of a global growth slowdown.