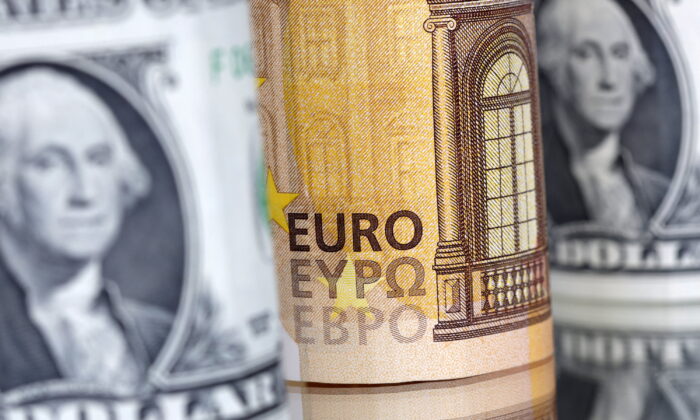 LONDON—The euro slipped from two-week highs on Wednesday, as investors braced for a crucial European Central Bank policy meeting on Thursday after policymakers floated the prospects of a 50 bps interest rate hike.

The single currency has rallied more than 3 percent in the last four trading sessions on expectations the European Central Bank (ECB) could deliver a big 50-bps rate hike.

But investors’ mood turned sour on Wednesday with European stock markets in the red and U.S. stock futures pointing to a rocky start and weighing on the single currency.

“Fears appear to be rising again about Russian gas supplies to Europe and the potential for a deep recession there, and this downbeat sentiment has seen safe haven assets in the ascendancy again,” said Stuart Cole, chief macro economist at Equiti Capital in London.

Both events—the ECB meeting and the reopening of the Nord Stream 1 conduit after a 10-day shutdown —are due on Thursday, leaving markets on tenterhooks.

The event risks lifted short-dated euro-dollar implied volatility, a gauge of expected swings, to 14 percent. It touched March 2020 highs above 14.6 percent on Tuesday.

“A discussion regarding 50 bps is justified and it will all then depend on what ECB does vis-a-vis the (monetary policy) transmission protection mechanism and then on further rate hikes,” said Peter Kinsella, global head of FX strategy at asset manager UBP.

He was referring to the ECB’s plans for a so-called anti-fragmentation tool to shield Italy and other weak eurozone states from higher borrowing costs. The ECB is meant to detail these plans at its Thursday meeting.

Against the basket of major currencies in the dollar index, the greenback rose 0.2 percent at 106.92.

Markets have pared expectations of a 100 bps U.S. interest rate rise next week and now see a 23 percent probability of such a move after policymakers poured cold water on it.

The Bank of Japan is expected to stick to its dovish stance at its Thursday meeting. That view held the yen at 138.10 yen per dollar, not far off 24-year highs.