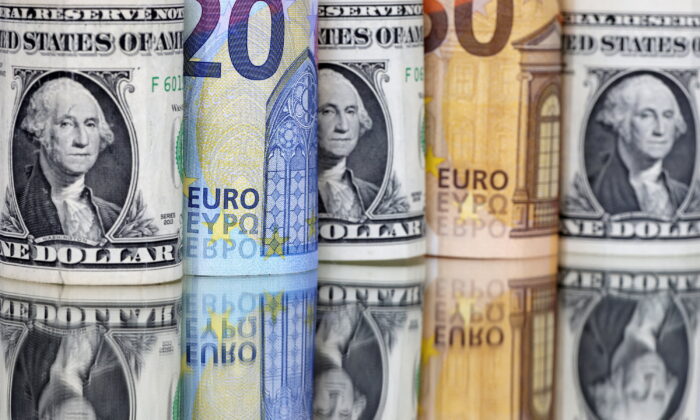 LONDON—The euro sank below $0.99 to a new 20-year low on Monday after Russia’s halt to gas supplies down its main pipeline to Europe heightened fears about a deepening energy crisis across the region.

The euro has been increasingly correlated with natural gas prices in recent months, with the former falling when prices of the energy source rise.

Europe is scrambling to wean itself off Russian supplies and build up reserves before the cold winter months, but investors reckon the hit to its economy will be huge.

Russia scrapped a Saturday deadline for flows down the Nord Stream pipeline to resume, citing an oil leak in a turbine. It coincided with the Group of Seven finance ministers announcing a price cap on Russian oil.

“Gas flows have been curtailed even more than expected and we have already seen evidence of demand destruction weighing on activity,” said Michael Cahill, a strategist at Goldman Sachs.

“We now expect the Euro to fall further below parity ($0.97) and remain around that level for the next six months,” he added.

Other currencies vulnerable to spiraling energy prices also fell. In early trading, sterling dropped half a percent to a new 2–1/2 year low of $1.1444, with traders also eyeing the announcement of a new British prime minister due around 1130 GMT.

The dollar index, which measures the greenback against a basket of currencies, briefly hit 110.27, its strongest since June 2002 as the euro tumbled. It later fell back and was last down 0.2 percent at 109.74.

In what is a huge week for the euro, investors are also preparing for Thursday’s European Central Bank (ECB) meeting and markets have priced a near 80 percent chance of a supersized 75 basis point (bp) interest rate hike.

ECB officials will be keen to see the euro, which has lost around 8 percent of its value in the past three months, stabilize. That will feed into the desire to try to tame inflation through tightening policy.

“Should the ECB push back so prematurely on market pricing, it will likely draw the curtains for the euro’s burial,” said Simon Harvey, head of FX analysis at Monex Europe.

“While this would come as welcome news to the German manufacturing sector, which has seen new export orders continue to shrink, it would only fan the current energy related inflation pressures, making the ECB’s goal of price stability even harder to reach.”

Other currencies that tend to perform badly when market confidence is shaken also fell on Monday. The risk-sensitive Australian dollar slid as much as 0.5 percent towards a seven-week low at $0.6773

The dollar’s appeal as the go-to currency this year helped it to rise even against safe-haven currencies. It rose to 140.59 Japanese yen.

The offshore yuan fell to a new two-year low of 6.9543 per dollar, as worries linger over COVID-19 lockdown measures in China.

China’s southern tech hub of Shenzhen said it would adopt tiered anti-virus restriction measures beginning on Monday, while Chengdu announced an extension of lockdown curbs, as the country grapples with fresh outbreaks.