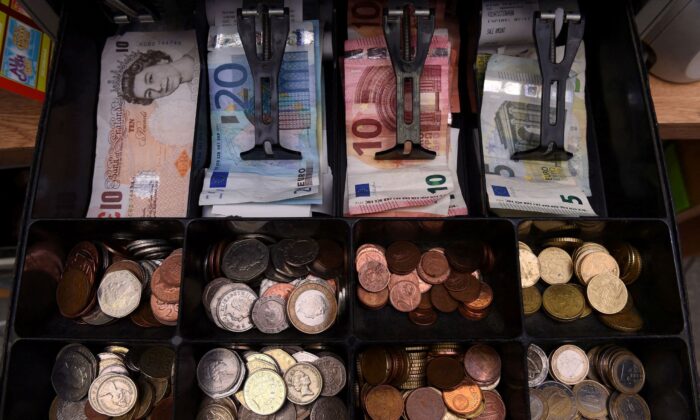 A shop cash register is seen with both Sterling and Euro currency in the till at the border town of Pettigo, Ireland, on Oct. 14, 2016. (Clodagh Kilcoyne/Reuters)
Markets

LONDON—The euro edged up from 22-month lows on Tuesday as war in Ukraine darkens Europe’s economic outlook, while currencies sensitive to soaring commodity prices were volatile.

Russia’s invasion of Ukraine has led to increased demand for assets seen as safer across markets, with the dollar—the world’s reserve currency—up around 3 percent over nearly two weeks as the crisis has intensified.

The crisis has led to soaring energy prices and concerns about inflation and a possible hit to global economic recovery.

“The price action appears to reflect building concerns over a sharper slowdown/recession for the global economy on the back of the energy price shock,” currency analysts at MUFG said in a note.

The euro regained some ground on the day after five sessions of declines versus the dollar. It was up more than a cent from a trough of $1.08060 on Monday—its lowest since March 2020 when the COVID-19 pandemic gripped Europe.

The single currency was briefly trading at parity with the Swiss franc on Monday for the first time in seven years, but again gained some ground, last up 0.6 percent.

Traders are expecting choppy markets, with euro/dollar volatility gauges at their highest since the market chaos of March 2020. Overall forex volatility gauges were also up to the highest level since April 2020.

Oil prices rose on Tuesday, with Brent surging past $127 a barrel, as the possibility of formal U.S. sanctions against Russian oil exports spurred concerns over supply.

This helped lift the oil sensitive Norwegian crown by 1 percent versus the dollar on the day.

Analysts expect the supply shock to persist and hold back growth.

The ECB meets on Thursday with the specter of stagflation prompting economists to suggest policymakers might delay rate hikes until late in the year.

Besides commodities’ rally, the war and subsequent Western sanctions have crushed Russian assets, with the rouble falling to a record low of 160 to the dollar in erratic offshore trade on Monday. The rouble firmed slightly in thin offshore trade on Tuesday.

Other commodities and exporters’ currencies paused on Tuesday, with the Australian and New Zealand dollars off Monday’s four-month peaks. Traders are starting to fret that in the longer run sky-high commodity prices could become a drag on world growth.