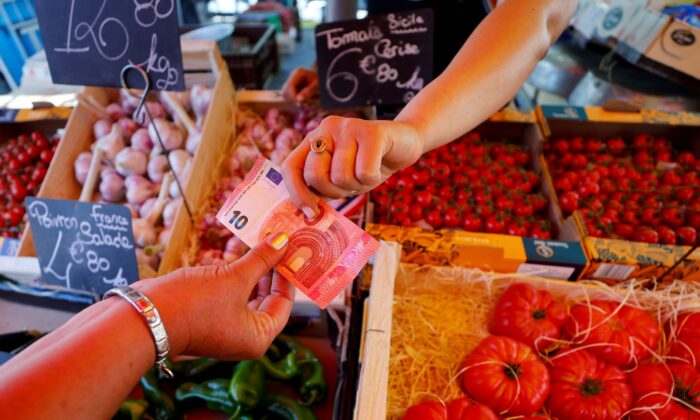 A shopper pays with a ten Euro banknote at a local market in Nice, France, on June 7, 2022. (Eric Gaillard/Reuters)
Markets

LONDON—The euro tumbled towards parity versus the dollar on Monday as the biggest single pipeline carrying Russian gas to Germany entered annual maintenance, with flows expected to stop for 10 days.

Investors are worried the shutdown might be extended due to the war in Ukraine, restricting European gas supply further and tipping the struggling eurozone economy into recession.

“What’s interesting is that we are reversing the bounce from Friday,” said Societe Generale currency strategist Kenneth Broux.

“It looks likely that we will be testing parity—we have two big reports from the U.S. and that could be another catalyst,” he said, referring to inflation and retail sales data.

The single currency was last down 0.8 percent at $1.0105 per dollar thanks to the greenback’s broad gains as risk aversion gripped investors.

It fell to the brink of parity at $1.0072 on Friday after the release of a bigger-than-forecast U.S. payrolls figure for June before bouncing higher.

Broux said the euro was only likely to rally once the European economic outlook improved and if the scope for aggressive U.S. rate hikes eased.

Analysts at ING added that with energy supplies unlikely to improve and central bankers showing no signs of being distracted from tightening cycles, the worst case for the euro was that it heads towards $0.95 in July.

The dollar climbed to a 24-year high versus the yen after Japan’s ruling conservative coalition’s strong election showing indicated no change to loose monetary policies.

Expectations of another red-hot U.S. inflation data print for June will bolster bets of aggressive rate hikes from the Federal Reserve and could propel the dollar higher. A Reuters poll expects an 8.8 percent reading, a fresh 40-year high, compared to 8.6 percent in June.

The other main economic event this week is Chinese second-quarter GDP data on Friday, with investors watching for signs of how hard the economy was hit by COVID-19 lockdowns.

The offshore yuan was trading 0.3 percent weaker versus the dollar.

Cryptocurrencies were on the back foot with Bitcoin flirting around the $20,000 levels.

By Saikat Chatterjee and Dhara Ranasinghe