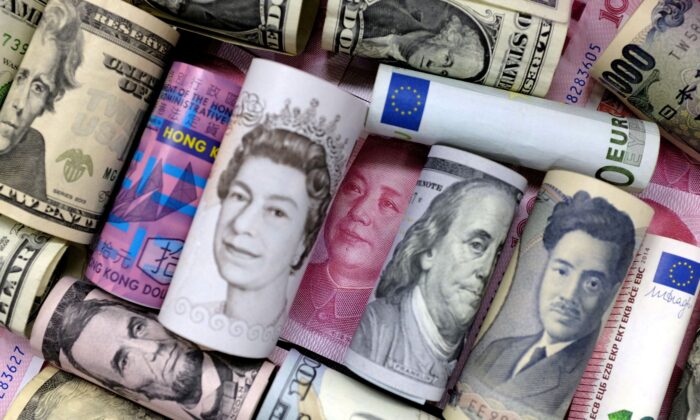 The euro edged higher on Friday, but concerns about a potential slowdown of the economy kept it in a tight range, while the dollar weakened as investors priced in expected monetary tightening by the Federal Reserve.

“EUR-USD remains quite stuck at around 1.10, with better-than-expected PMI surveys across the eurozone for March not sufficient to induce buying interest,” Unicredit analysts said in a research note.

“I think hawkish remarks from the ECB have supported the single currency,” said Roman Ziruk, market analyst at Ebury.

The European Central Bank would reconsider plans to end its bond-buying stimulus program this summer only if the eurozone economy fell into a “deep recession,” ECB board member Isabel Schnabel said on Thursday.

Derek Halpenny, head of research for global markets at MUFG, said in a note to clients that some renewed optimism over the prospect of the end of the conflict in Ukraine “helped improve financial market conditions and weaken the U.S. dollar.”

The U.S. dollar index, which measures the greenback against six peers, edged 0.1 percent lower to 98.632

BofA analysts said markets had priced in the next likely interest rate hikes by the Fed a lot more rapidly than during the previous tightening cycle between 2015 and 2018.

Money markets are betting the Fed raises its benchmark overnight interest rate by 190 basis points by the end of this year, including an 80 percent chance of a half-percentage-point increase at the May 3–4 policy meeting.

Japan’s yen staged a rebound versus the greenback, up 0.6 percent at 121.6. Overnight, it hit 122.44, the lowest level since December 2015, on the difference in rate hike expectations between the Bank of Japan (BOJ) and other major central banks.

Analysts flagged that the BOJ provided a bullish signal as it refrained from stepping into the market Friday morning, even as the 10-year government bond yield rose above the level at which the central bank had offered to buy an unlimited amount in February.

However, Governor Haruhiko Kuroda clarified that a weak yen benefits the economy.

We don’t expect a “depreciation of the yen versus the dollar. We think that at 115, it is fairly valued considering the central bank’s dovish stance,” Ebury’s Ziruk added.

The Norwegian crown was down 0.2 percent lower against the euro after rising the previous day as the central bank raised its benchmark interest rate and said it now plans to hike at a faster pace than previously intended.