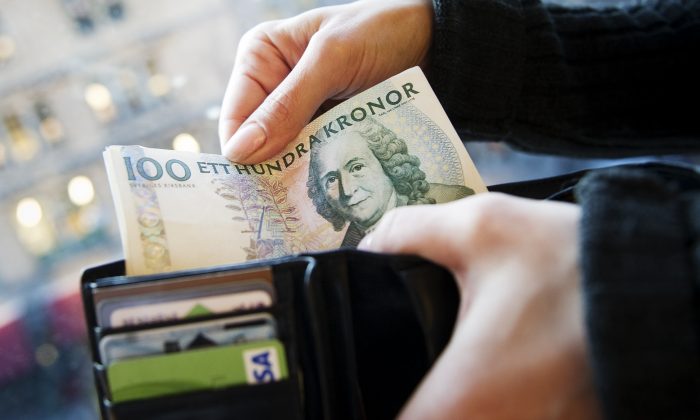 A women puts Swedish Crowns banknotes into her wallet in Stockholm in a file photo. (Jonathan Nackstrand/AFP/Getty Images)
Markets

Euro Drops Against US Dollar Amid Renewed Safe-Haven Demand

LONDON—The euro fell to a two-week low against the U.S. dollar and remained close to a 2015 low versus the Swiss franc amid safe-haven demand on renewed worries about higher rates and a global recession.

The Swedish crown trimmed early gains against the euro after briefly jumping on the country’s central bank decision to hike its benchmark interest rate by 50 basis points as expected.

Rising concerns around recession in the eurozone linked to the energy crisis amid the war in Ukraine have strengthen safe-haven flows against the euro.

The common currency was set for its worst quarter against the dollar since the end of 2016, on track for a 6 percent quarterly decline. At 1057 GMT, it was 0.36 percent lower on the day versus the dollar at $1.0404.

Fresh gloomy economic data for the eurozone showed that French inflation climbed to a record high of 6.5 percent in June, while Greece cut its growth forecast to 3.2 percent this year from 3.8 percent.

Eurozone unemployment fell to a new record low in May as the economy continued to rebound from the COVID-19 pandemic, even if inflation exacerbated by Russia’s invasion of Ukraine is expected to dampen growth.

The lower-than-expected unemployment rate may bolster European Central Bank President Christine Lagarde’s confidence to hike rates, said Alex Livingstone, head of trading at Titan Asset Management. “However, the ECB will need to be extremely cautious in their next move, attempting to avoid smothering growth.”

A U.S. recession over the next 12 months is “probably more likely than not,” PIMCO global chief investment officer for fixed income Andrew Balls said.

The ECB is expected to raise interest rates in July for the first time in a decade to try to cool accelerating inflation, although economists are divided on the magnitude of any hike.

Lagarde and U.S. Federal Reserve Chair Jerome Powell, speaking on Wednesday at the ECB’s annual conference in Sintra, Portugal, said it was important to bring down inflation, even if it meant economic pain.

“Being well-priced and in line with market consensus, the 50bp hike did not rock the water as the SEK is concerned,” Danskebank analysts told clients in a note.

The dollar also traded just below a fresh a 24-year peak of 137 Japanese yen touched on Wednesday, as the gap between a hawkish Fed and a dovish Bank of Japan continues to weigh heavily on the yen, which was last trading at 136.4 yen.

Bitcoin dipped back below the symbolic $20,000 level on persistent market ructions, and was also hurt by the U.S. Securities and Exchange Commission rejecting a proposal to list a spot bitcoin exchange-traded fund by digital asset manager Grayscale.