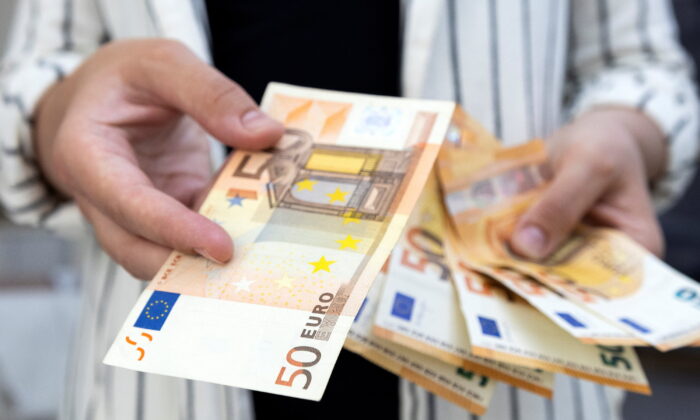 A woman holds Euro banknotes in this illustration taken on May 30, 2022. (Dado Ruvic/Reuters)
Markets

NEW YORK—The euro rebounded on Tuesday after sliding to a 20-year low and nearing parity against the U.S. dollar as investors worried that an energy crisis in the region would bring on a recession.

The single currency reached $1.00005 against the greenback, the lowest since December 2002, after data showed German investor sentiment in July plunged below levels at the outset of the coronavirus pandemic due to energy concerns, supply bottlenecks, and rate hikes from the European Central Bank (ECB).

“It seems like it’s a very gloomy outlook for the euro … a sub-parity paradigm is very much in the cards,” said Mazen Issa, senior FX strategist at TD Securities in New York, adding that the single currency could drop to the 85–90 cents U.S. level.

Issa cited the Federal Reserve hiking rates further than the ECB, and macro factors including Europe’s quickly deteriorating current account as weighing on the single currency.

The dollar is benefiting from expectations that the U.S. central bank has more room to hike rates than peers, which are facing more challenging growth outlooks.

Concerns that Europe could fall into a recession have increased since the biggest single pipeline carrying Russian gas to Germany, the Nord Stream 1 pipeline, began annual maintenance on Monday. Governments, markets, and companies are worried the shutdown might be extended because of the war in Ukraine.

The single currency was last at $1.0045, after bouncing from the $1 area, which some analysts attributed to technical factors relating to options activity and short-covering.

Neil Jones, head of currency sales at Mizuho, said markets had been “short” on the euro in anticipation of a break below parity, but “we didn’t get it,” which led these investors to buy the currency back.

Some of the rebound may also have had to do with the $1 area being an important psychological level.

A possible catalyst that could push the euro back lower is highly anticipated inflation data on Wednesday, which is expected to show that U.S. consumer prices rose by an annual rate of 8.8 percent in June.

“We may have to wait for U.S. CPI … or a clearer picture for European energy markets once planned maintenance in Nord Stream comes close to finalising for euro-dollar to break the (parity) threshold,” said Simon Harvey, head of FX at Monex Europe.

Richmond Fed President Thomas Barkin said on Tuesday he expected the U.S. central bank to succeed in its battle against inflation, but that the pace of progress was unpredictable.

By Karen Brettell and Sujata Rao