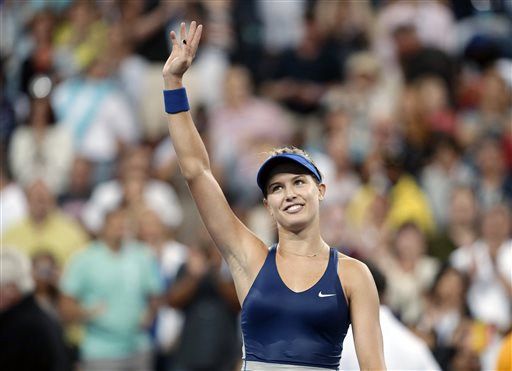 Eugenie Bouchard, of Canada, waves to the crowd after defeating Barbora Zahlavova Strycova, of the Czech Republic, in the third round of the 2014 U.S. Open tennis tournament Saturday, Aug. 30, 2014, in New York. (AP Photo/Darron Cummings)
Canada

Eugenie Bouchard is set to take on Ekaterina Makarova in the US Open fourth round on Monday, September 1.

The game in New York City is scheduled to start at approximately 4 p.m. EDT.

The match will be broadcast on CBS or CBS Sports Network in the United States, Sky Sports in the United Kingdom, and TSN2 in Canada.

Live streaming will be available via CBS, Sky Sports, TSN, and TennisTV.

Other broadcasters include Eurosport in Europe, Ten Sports in the Indian subcontinent, WOWOW in Japan, CCTV in China, ESPN International in Mexico, Central America, the Caribbean and South America; and Fox Sports in Australia.

Makarova of Russia is ranked No. 17 in the tournament and No. 18 in the world. She beat unranked Zarina Diyas of Kazakhstan in the third round, 6-2, 6-4.

The women have only played once, last year in the first round at the Citi Open in Washington D.C. Bouchard lost in two sets.

What to watch at US Open: Serena seeking quarters

Serena Williams takes the next step toward trying to fill out that list when she plays her fourth-round match Monday. First things first, though. The 17-time Grand Slam champion has yet to even reach a major quarterfinal this season.

“I’ve been a casualty this whole year at Grand Slams,” she said after Saturday’s third-round victory. “I’m just hoping to keep staying in there.”

The two-time defending champ has been locked in so far. Of the 16 women who reached the fourth round, Williams had dropped the fewest games (11).

She’s 5-0 in her career in this round of Grand Slam tournaments, although her previous opponents weren’t exactly of Williams’ caliber. In fact, she faced an unseeded player in four of those matches, beating 18th-ranked Yanina Wickmayer at the 2010 U.S. Open.

And Williams is perfect at the U.S. Open against players of Kanepi’s caliber. Eight of her nine career losses at Flushing Meadows were to top-10 opponents, and the one exception comes with a big asterisk: Kim Clijsters was a major champion returning from retirement.

Here are some other things to watch on Day 8 at the year’s last Grand Slam tournament:

AZARENKA ASCENDING: Victoria Azarenka is starting to look like the player who lost to Williams in the last two U.S. Open finals. Seeded 16th after an injury-mired season, the two-time Australian Open champ has dropped just eight games in her last five sets.

And now she gets to face an opponent who has never experienced anything like this. Aleksandra Krunic, 21, had played one Grand Slam match before this year’s U.S. Open.

The 145th-ranked Serb, who upset Wimbledon champ Petra Kvitova in the third round, is seeking to become the first qualifier since Barbara Gerken in 1981 to reach the U.S. Open quarterfinals. She’d also become the lowest-ranked quarterfinalist in the tournament’s history (not counting players who didn’t have enough matches to earn a ranking).

LAST WOMEN STANDING: Seventh-seeded Eugenie Bouchard is the only woman in the top eight other than Williams who remains alive. She plays 17th-seeded Ekaterina Makarova on Monday.

Murray had won eight straight in the series before Tsonga’s victory in Toronto in mid-August, part of a tournament title run for the Frenchman that also included victories over Novak Djokovic and Roger Federer.

The winner of the Murray-Tsonga match could face the top-ranked Djokovic in the quarterfinals. He plays 22nd-seeded Philipp Kohlschreiber on Monday in Djokovic’s first match in Louis Armstrong Stadium since the fourth round in 2012.

In other men’s matches, fifth-seeded Milos Raonic and 10th-seeded Kei Nishikori meet in this round for the second straight Grand Slam tournament; Raonic won in four sets at Wimbledon. Third-seeded Stan Wawrinka, the Australian Open champ, takes on an opponent who has given him trouble in 16th-seeded Tommy Robredo.

BELLIS IS BACK: A first-round juniors match on the Grandstand, the tournament’s third-largest court? Yes, when it stars the darling of the U.S. Open.

CiCi Bellis plays Monday, four days after her run in the main draw ended. The 15-year-old American upset 12th-seeded Dominika Cibulkova, the Australian Open runner-up, in the first round. She lost in the second round Thursday, with fans waiting in line for hours to get in to see the match.

Bellis is the top-seeded girl in the junior tournament. She opens against Renata Zarazua of Mexico.