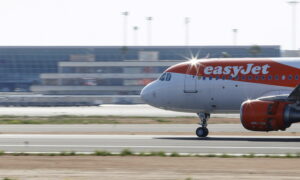 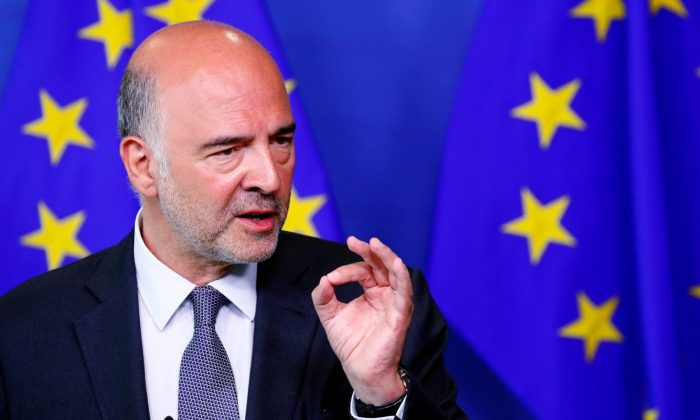 BRUSSELS—The European Union adopted a nonconfrontational stance toward Italy on Sept. 27, after Italy defied Brussels and surprised markets with plans for a large budget deficit, but may take a more aggressive line if Rome sticks to too bold targets.

Italy’s eurosceptic government targeted for the next three years a budget deficit of 2.4 percent of GDP which would imply no debt reduction against requirements to cut it.

“We have no interest in a crisis between the Commission and Italy,” EU Economic Commissioner Pierre Moscovici said on Sept. 28, striking a cautious note that stems from an awareness that EU recommendations and sanctions may have little impact in Rome.

Officials and diplomats in Brussels still hope market forces will convince Italy to change its budgetary plans before they are formally submitted by mid-October to the EU Commission.

The euro fell on Sept. 28 to its lowest in nearly two weeks while Italy’s bond yields hit their highest level in three weeks after the government announced its plans.

If deficit targets remain unchanged by the October deadline, the Commission may reject Italy’s draft budget, something it has never done to any country.

Italy’s current fiscal plan “does not seem to be in line with the stability and growth pact,” the Commission’s Vice President Valdis Dombrovskis told a conference in the Latvian capital Riga later on Friday, referring to the EU’s fiscal rules.

But he stopped short of saying what kind of EU reaction this would trigger.

It is still far from certain whether the EU executive would choose to enter the uncharted territory of sending the budget back to Rome, a move that would escalate the crisis if Italy were to ignore its recommendations.

In that case, the Commission would have to open sanctions proceedings against Rome, but that might not happen before spring because disciplinary decisions are usually taken only after final data are available in April.

That would be painfully close to elections to the European Parliament in May, when political considerations might be more important than EU procedure.

Rome is also aware that France escaped sanctions despite being the subject of EU deficit proceedings for nine years. The Commission also spared Spain and Portugal fines in 2016 despite their excessive deficits.

Italy is the third-largest economy of the 19-country eurozone and a crisis there has the potential to unsettle the entire bloc, to the discontent of other members which could try to convince Rome to change course.

Italy’s eurosceptic government could ignore that pressure too, but markets might not.

If Rome held defiant, officials envisage EU leaders discussing Italy at summits, as they did with Greece on several occasions in past years at the height of the Greek debt crisis.

If market pressure eased, EU peers would have little leverage. However, if yields on Italy’s sovereign bonds kept rising to unsustainable levels and share prices of its banks plunged further, an EU rescue plan might be needed to salvage Italy and the whole eurozone.

But even in this case, it would be up to Rome to ask for help.

“Italy is unlikely to bend, as Greece did,” one EU official said, adding that some people in Brussels had begun talking about the possibility of Italy quitting the eurozone.

“The risk is to go all the way to the exit,” the official said.