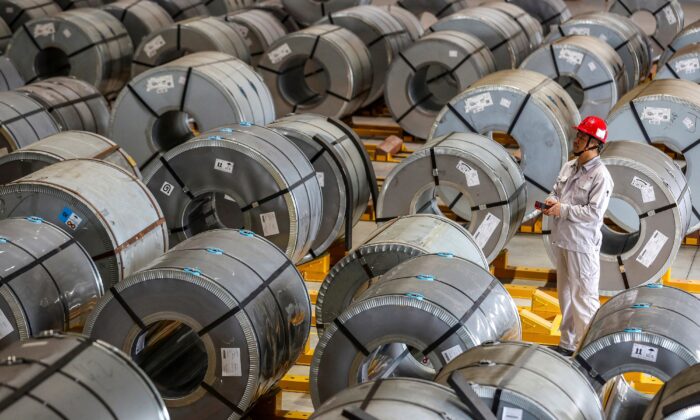 A worker checks rolls of sheet aluminium at a factory in Wuhan, Hubei province, China, on May 8, 2021. (STR/China OUT/AFP via Getty Images)
China

BRUSSELS—The European Union is set to impose duties on aluminium from China in October, only to suspend them for nine months, the EU industry association said on Wednesday, adding that this would threaten jobs and send the wrong signal to Beijing.

The European Commission launched an investigation into aluminium flat-rolled products, which are used in a variety of sectors, from construction to transport and consumer durables, in August 2020 and set provisional duties of between 19.3 percent and 46.7 percent in April 2021.

Definitive duties, likely to be between 14 percent and 25 percent, would normally apply from October for five years. However, after complaints from two aluminium users and an importer, they are set to be suspended for nine months, European Aluminium said.

The Commission said its investigation was still ongoing, with definitive measures, if any, needing to be imposed by Oct 11. It added that it had received a request for suspension and was considering it, in consultation with EU member states.

No final decision had been made, it said.

European Aluminium Director Gerd Goetz said in a statement that the development had sent shock waves through the aluminium and other industrial sectors.

“How can European industries trust in the urgently needed trade enforcement measures when the flood gates for high-carbon, dumped Chinese products stay so willingly open?” he said.

The Commission has suspended tariffs on only a handful of occasions, the last time in 2009 related to shipments of chemical glyphosate from China.

The new suspension request pointed to market conditions that had changed since the initial complaint was lodged in mid-2020.

Like many commodities, aluminium prices have risen as economies have rebounded. European Aluminium says though that EU capacity is enough to supply the market and sector profit margins are tight.