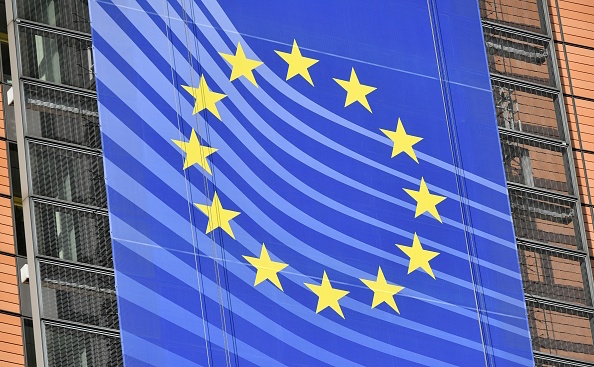 A baner displaying the European flag adorns the facade of the European Commission in Brussels on Nov. 14, 2018. (Photo by Emmanuel DUNAND / AFP) (Photo credit should read EMMANUEL DUNAND/AFP/Getty Images)
Europe

WASHINGTON—European countries are increasingly concerned about potential digital threats from Beijing. To tackle China’s behavior in cyberspace, the European Union is looking to increase a crackdown on Chinese telecom companies investing in the bloc.

The Financial Times recently reported that Brussels wants to step up efforts to map China’s footprint in crucial technological infrastructure in Europe, citing a Western diplomat. The move comes amid growing pressure from Washington and mounting concerns in countries like Germany and Japan.

The diplomat cited China’s motivations in the rollout of fifth-generation wireless technology (5G) networks and urged governments to be cautious at the upcoming 5G spectrum auctions in Europe.

“A number of like-minded countries are increasingly concerned about China’s behavior in this [cyber]sphere,” the diplomat told Financial Times.

“EU countries, including Spain, Italy, and Finland, held 5G auctions in 2018, with a clutch of others scheduled for 2019,” he added. “The sales can raise billions of euros for government. We are urging everyone to avoid making any hasty moves they might regret later.”

The Chinese telecom companies came under scrutiny after the arrest of Huawei Chief Financial Officer Meng Wanzhou by Canadian authorities last month. Governments around the world consider the company an important tool for Beijing and allege that it works at the behest of the Chinese regime.

European Commission Vice President Andrus Ansip, who covers digital issues, said earlier that the EU should be worried about Huawei and other Chinese technology companies due to rising cybersecurity risks.

“I think we have to be worried about those companies,” Ansip said during a news conference in Brussels on Dec. 7.

“It’s not a good sign when companies have to open their systems for some kind of secret services,” he said. “As normal ordinary people, of course, we have to be afraid.”

He also said these companies produced chips that could be used “to get our secrets.”

Telecom companies around the world are engaged in fierce competition to secure first-mover advantage in the deployment of 5G wireless technology networks.

Beijing recognizes 5G’s financial advantages and identifies it as a national priority to become a global leader in next-generation technologies. Hence, the Chinese regime heavily subsidizes the efforts of its mobile carriers and equipment manufacturers.

The Chinese government wants to lead in international 5G standards to ensure they set global standards. Such leadership may result in higher revenues for China and global control over the cyber domain.

“That’s where the Pearl Harbors of the future will take place,” said Declan Ganley, an Irish telecommunications entrepreneur and founder of Rivada Networks. “And whoever dominates the architecture of 5G has got enormous strategic security and, frankly, economic advantage.”

To win the 5G race, according to Ganley, Western governments have to fix the vulnerabilities in the mobile business model that the Chinese have been exploiting for years. The companies write massive upfront checks to governments for spectrum, and that affects their financial ability to compete with Chinese companies.

He suggests that the Western world change its business model by creating wholesale markets for capacity where the government still owns the spectrum.

Under the new business model, “the private sector could design, finance, build, and operate such wholesale 5G networks. Government would allocate the spectrum and have a constant revenue share but would not have to surrender title to the spectrum,” he said.

“If you do that, you can destroy the Chinese advantage.”