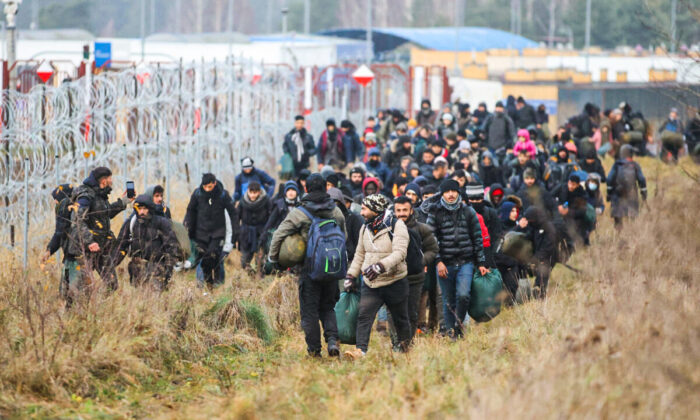 A group of migrants moves along the Belarusian-Polish border towards a camp to join those gathered at the spot and aiming to enter EU member Poland, in the Grodno region on Nov. 12, 2021. (Leonid Shcheglov/Belta/AFP via Getty Images)
Europe

PARIS—EU foreign ministers will widen sanctions on Belarus on Monday to include airlines and travel agencies thought to involved in bringing migrants to the bloc’s border, the European Union’s foreign policy chief Josep Borrell said.

The EU has accused Belarus of encouraging migrants to come to its territory and pushing thousands of them to cross into Poland and other neighboring EU states in retaliation for sanctions already imposed on Minsk.

Two diplomats said on Thursday the EU is considering imposing sanctions on Belarus’ main airport in a bid to make it more difficult for airlines to bring in migrants.

The bloc’s foreign ministers are due to meet on Monday.

“We will give the green light to extending the legal framework of our sanctions against Belarus so that it can be applied to everyone who participates in smuggling migrants to this country,” Borrell told French weekend newspaper Le Journal du Dimanche.

He added that executives at airlines and travel agencies could be hit with travel bans and asset freezes in the European Union. Some 30 Belarus government officials thought to be involved in the crisis could also be targeted with sanctions, Borrell said.

Belarusian President Alexander Lukashenko, already under international sanctions for cracking down on protests, has threatened to retaliate against any new measures, including by shutting down the transit of natural gas via Belarus.