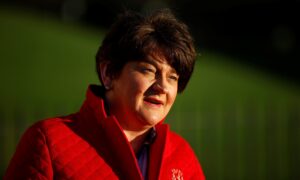 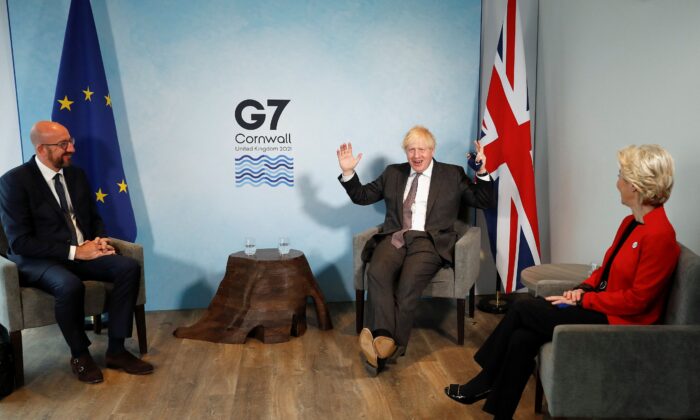 CARBIS BAY, England—The European Union told British Prime Minister Boris Johnson on Saturday that he must implement the Brexit deal that he signed to ensure the delicate peace in Northern Ireland and that the 27-member bloc was completely unified on that position.

The United States has expressed grave concern that a dispute between London and Brussels over the implementation of the 2020 Brexit divorce treaty could undermine the 1998 Good Friday peace deal that ended three decades of violence.

After the United Kingdom exited the bloc’s orbit on Jan. 1, Johnson has unilaterally delayed the implementation of some provisions of the Northern Ireland Protocol of the deal and his top negotiator has said the protocol is unsustainable.

“The Good Friday Agreement and peace on the island of Ireland are paramount,” European Commission President Ursula von der Leyen said after a meeting with Johnson and European Council President Charles Michel. “Both sides must implement what we agreed on.”

“There is complete EU unity on this,” she said, adding that the deal had been agreed, signed, and ratified by both Johnson’s government and the EU.

The 1998 peace deal largely brought an end to the “Troubles”—three decades of conflict between Irish Catholic nationalist militants and pro-British Protestant “loyalist” paramilitaries in which 3,600 people were killed.

Though Brexit was not part of the formal agenda for the Group of Seven summit in the English seaside resort of Carbis Bay, it was raised in meetings between Johnson and EU leaders.

Brexit has strained the situation in Northern Ireland: The EU wants to protect its markets but an effective border in the Irish Sea created by the Northern Ireland Protocol cuts off the British province from the rest of the United Kingdom.

The protocol aims to keep the province, which borders EU member Ireland, in both the United Kingdom’s customs territory and the EU’s single market.

London says the protocol is unsustainable in its current form because of the disruption it has caused to supplies of everyday goods to Northern Ireland.

The pro-British “unionist” community in Northern Ireland province say they are now split off from the rest of the United Kingdom and that the Brexit deal that Johnson signed therefore breaches the 1998 peace deal. But the open border between the province and Ireland was a key principle of the Good Friday deal.

U.S. President Joe Biden has made clear that any steps that imperilled the 1998 peace agreement would not be welcomed by Washington.