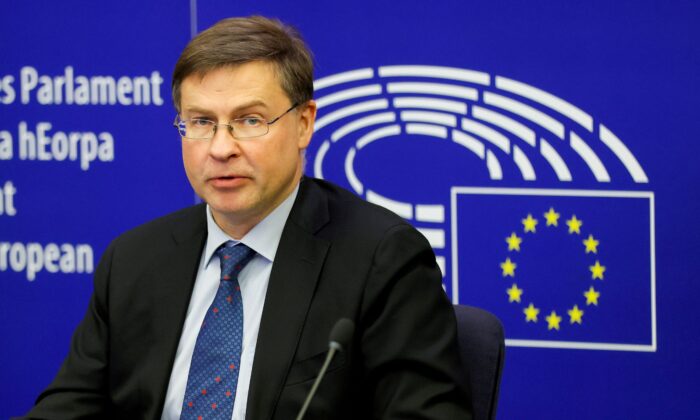 European Commission Executive Vice President Valdis Dombrovskis attends a press conference of Read-out of the College meeting during a debate on Poland's challenge to the supremacy of EU laws at the European Parliament in Strasbourg, France, on Oct. 19, 2021. (Ronald Wittek/Pool via Reuters)
Economy

EU Seeks to Forge New Global Trade Rules With US

BRUSSELS—The European Union has experienced a “breakthrough year” with the United States even if not all trade irritants are gone and now wants to work with its transatlantic ally to start forging trade rules for the future, the EU trade chief said.

“One can say that this year was indeed a breakthrough year for EU–U.S. trade relations,” European Commission Executive Vice-President Valdis Dombrovskis said in an interview for the Reuters Next conference.

On steel, the United States has replaced tariffs on all EU imports with tariff-free quotas based on historical volumes. Dombrovskis said the end result in two years had to be a complete lifting of tariffs and quotas.

Brussels was also looking closely at the United States’ “Buy American” agenda aimed at ensuring that federal agencies buy American-produced goods as much as possible.

Dombrovskis said the EU would look at the extent to which Washington respects its international commitments. Both are signatories to the WTO agreement on government procurement.

“There are clearly things to watch, but what I can say is that we are now engaging constructively so I am confident we are able to address any issues or concerns that are coming,” Dombrovskis said.

The European Union, the United States and Japan on Tuesday relaunched their trilateral partnership to tackle problems of non-market economies, such as China. The work is to include developing new trade rules.

Dombrovskis said he planned to meet with his counterparts in half a year to take stock and decide on next steps. China would feature but would not be the sole focus of this and other discussions between the EU and the United States on steel overcapacity, aircraft subsidies, and technology, he said.

Dombrovskis and the world’s top trade officials were due to meet in Geneva for the World Trade Organization’s ministerial conference this week, until Swiss coronavirus restrictions forced its postponement.

The EU had hoped to emerge from the meeting with a new group to work on reform of the WTO and global trading rules and to produce results by the following meeting due in two years’ time.

Dombrovskis said the bloc wants a reform of the rule book to take into account green and digital economic transformation, industrial subsidies, and state-owned enterprises.