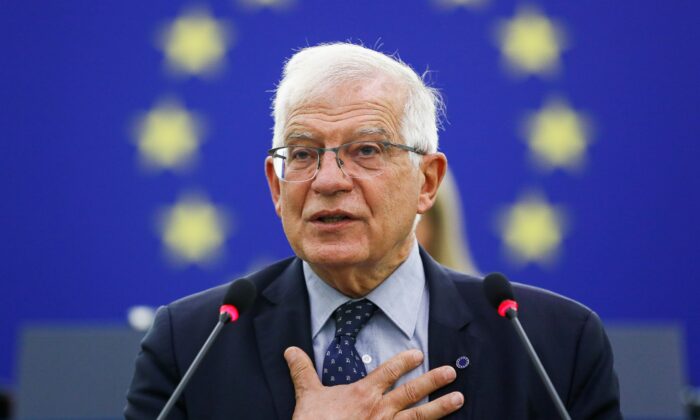 EU foreign policy chief Josep Borrell delivers a speech on the situation in Afghanistan during a plenary session at the European Parliament in Strasbourg, France, on Sept. 14, 2021. (Julien Warnand/Pool via Reuters)
Russia-Ukraine War

The European Union’s foreign policy chief, Josep Borrell, has said that insufficient support from the bloc’s member states means a complete embargo or punitive tariff on Russian oil and gas imports can’t yet be levied.

“At the moment, we in the EU do not have a unified position on this question,” Borrell was quoted as saying by the German newspaper Die Welt on April 25. “A final proposal for an embargo on oil and gas is not yet on the table.”

Borrell’s comment comes as some EU countries, including Poland and Lithuania, are pushing for a sixth round of sanctions against Russian oil imports in response to Moscow’s invasion of Ukraine on Feb. 24.

Those sanctions, EU officials say, are designed to minimize damage to the economies of the 27 member states while preventing the Kremlin from benefiting from lucrative income derived from energy exports, which serve as the Kremlin’s main source of foreign currency.

Some experts believe those energy payments are effectively being used to finance and bolster Russian President Vladimir Putin’s “special military operation” in Ukraine.

“We are working on a sixth sanctions package and one of the issues we are considering is some form of an oil embargo,” European Commission Executive Vice President Valdis Dombrovskis told The Times of London. “When we are imposing sanctions, we need to do so in a way that maximizes pressure on Russia while minimizing collateral damage on ourselves.”

Specific details regarding the oil sanctions haven’t yet been agreed upon by EU members, but could potentially see a gradual “phasing out” of Russian oil or tariffs imposed on exports beyond a certain price cap, according to The Times of London.

It’s also Europe’s biggest oil supplier, providing slightly more than a quarter, or 26 percent, of EU oil imports in 2020, according to data from the bloc’s statistics office Eurostat.

Despite the string of sanctions imposed by Western nations on Russia in recent months, Russia is expected to earn nearly $321 billion from energy exports in 2022, an increase of more than a third from 2021, Bloomberg News reported.

But while some EU states welcome a ban on Russian oil and gas, others, such as Germany—where energy prices have surged nearly 40 percent—are opposed to an immediate oil embargo, fearing the economic consequences it may have on the country, given that it currently purchases about 25 percent of its oil and 40 percent of its gas from Russia.

Borrell noted on April 25 that all EU states are working to become less dependent on Russian oil and gas in light of recent events and that he believes member states will eventually be able to do so, although a clear timeline isn’t in sight.

“At some point, it will happen and then Russia will feel painfully that the revenues from the oil and gas business are being lost,” Borrell said.