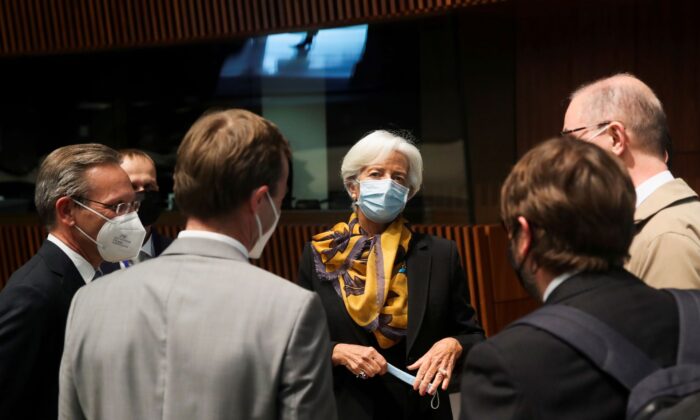 BRUSSELS—European Union finance ministers will on Monday discuss a surge in consumer prices, its impact on wages, and changes they would like made to the bloc’s budget rules to support investment and reduce debt.

Inflation rose 4.1 percent year-on-year last month in the 19 countries sharing the euro, up from 3.4 percent in September. Ministers are starting to worry that the rise might fuel stronger wage growth, creating an inflationary spiral.

“We always expected inflation numbers to pick up this year, but this has been faster than expected and we see levels we have not seen for a long time,” a senior EU official involved in the meeting said. “The 4.1 percent should generate a discussion.”

The October surge was mainly driven by a 23.5 percent jump in energy prices, which would eventually fall again, though probably not to the levels before the COVID-19 pandemic, the official said.

“We should come back to more benign inflation numbers, but the process will be slower than expected and the risk of second-round effects in wage formation is clearly something that needs to be taken seriously and monitored,” the official said.

The European Central Bank, which is in charge of keeping inflation at 2 percent over the medium term, will brief ministers. ECB chief economist Philip Lane, in comments published by Spanish newspaper El Pais on Monday, reiterated the bank’s message that high price growth is temporary.

“We believe that next year (supply) bottlenecks will ease and energy prices will decline or stabilise,” Lane said. “This current period of inflation is very unusual, temporary, and not a sign of a chronic situation.”

The ministers will start talks on a planned reform of the EU’s budget rules to adjust them to post-pandemic economic realities of high public debt and large investment needs to fight climate change and support growth.

The rules require annual public debt reduction rates that are too ambitious for most EU countries. The fiscal framework, which aims to keep budget deficits below 3 percent of GDP and debt below 60 percent to safeguard the euro’s value, also provides little explicit support for government investment.

A balance will be needed “between prudent policy and fiscal support for growth,” the official said of discussions that will take most of 2022.

“This is a long journey. We should not try to rush it,” the official said.