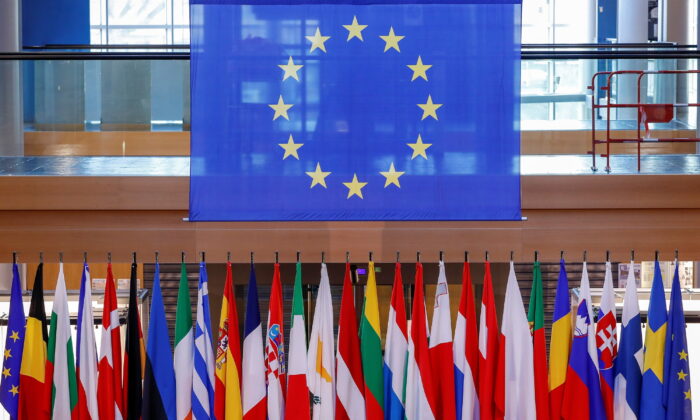 European flags are diplayed at the European Parliament in Strasbourg, France, on Nov. 24, 2021. (Julien Warnand/ via Reuters)
Europe

BRUSSELS—EU companies affected by sanctions imposed on Russia can get up to 400,000 euros ($440,360) in state support and compensation up to 30 percent of energy costs under looser EU state aid rules, the European Commission said on Wednesday.

From airlines to carmakers to tourism businesses, thousands of companies across the 27-country bloc have reported severe disruption due to the sanctions.

Companies in the agriculture, fisheries, aquaculture sectors can get up to 35,000 euros while businesses facing a liquidity crunch can get state guarantees on loans, subsidized loans.

The Commission did not specify which sectors would qualify for the larger support.

Companies facing soaring energy costs can get state aid up to 30 percent of costs, capped at 2 million euros, the Commission said.

This measure will benefit manufacturers of aluminum and other metals, glass fibers, pulp, fertiliser, hydrogen, and other basic chemicals.

“These sanctions also take a toll on the European economy and will continue to do so in the coming months. We need to mitigate the economic impact of this war and to support severely impacted companies and sectors,” Commission Vice-President Margrethe Vestager said in a statement.

The looser rules will be effective until the end of the year. Sanctioned Russian-controlled entities are not eligible for such aid.

The EU executive, which also acts as the bloc’s competition enforcer, relaxed its state aid rules two years ago, allowing governments to pump trillions of euros into companies hit by the COVID-19 pandemic.