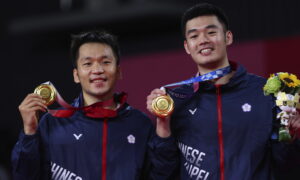 A Rude Welcome in Beijing for EU Parliamentary Delegates

Hu Jia is a courageous Chinese whom the European Parliament awarded this year's Sakharow Prize for his championing of human rights. The Buddhist had worked for AIDS causes and civil rights, but the Chinese regime had branded him an outlaw and incarcerated him prior to the Olympics, sentencing him to three-and-a-half years imprisonment.

"I have guests in my home right now and cannot come down to meet you and lead you upstairs," said Hu Jia's wife on the telephone. She spoke with European Union delegate Helga Trüpel who had planned a person-to-person visit during the Inter-parliamentary meeting of the EU and China in Beijing.

This brief telephone conversation was the only concession the Secret Service made, and Ms. Trüpel and her colleagues had to remain at the gates of BoBo Ziyou Cheng where Ms. Jinyan lives. "BoBo" is a New York buzzword middle class Chinese have adopted, and roughly translated means Bo (Bohemian), "artist," and Bo (bourgeois), citizen.

"Jinyan sounded sad. I was merely permitted one step into the area." The representative and the media entourage had to content and argue with about thirty police agents who controlled the area. They blithely state, "Unless Westerners produce an official invitation, Jiyan would not come down to fetch her, but Jiyan had told them she does not wish to come down, and that means she does not consider you a friend."

Helga Trüpel had come to the area for a personal visit with Hu Jia's wife and to hand her a present for their child.  She commented, "Jinyan was banned from coming downstairs. That is really a bad deal!" On her way to the area, Ms. Trüpel could not shake the State Security Service agents who also photographed her as she spoke with media representatives in her hotel.

Hu Jia's attorney Li Fangping is likewise a courageous individual in today's communist China who had begun in 2003 to intercede for innocent people and is one of China's 14 original human rights attorneys. Among his colleagues he is one of the lucky few who has not yet been incarcerated, but has not escaped intimidation and threats, and expects to be beaten. He managed to meet with Ms. Trüpel; a similar event did not go as planned a few months before: he wanted to meet with the Dutch Foreign Minister during his visit to China. The officials simply did not let him leave his apartment. How he managed this time—to meet with Ms. Trüpel—is classified information, because any bit of information is fodder for the Chinese SS.

According to attorney Li, Skharov Prize recipient Hu Jia was moved to a Beijing prison where conditions are not quite as harsh, and he may now receive medication.

Aside from the multifaceted themes under discussion, i.e. the global financial crisis, ecological problems, energy policies and more, human rights is part of the agenda during 27th Inter-parliamentary EU-China Meeting. "The Chinese delegation's attitude and demeanor in conversation with our European members was hostile and intimidating, because of the award Mr. Hu Jia had received," said Ms. Trüpel to The Epoch Times.

"This present development, a denial to meet with Zeng Jinyan, is one more acute demonstration that China's crucial constitutional rights are still being scoffed at." The Greens, the political party of which Ms. Trüpel is a member, speak of rude treatment from the Chinese in their press release to the European Parliament.

The EU delegate alluded once again to the awarding of this year's prize to Hu Jia and stated, "We won't give up hope that China one day will fully respect human rights."