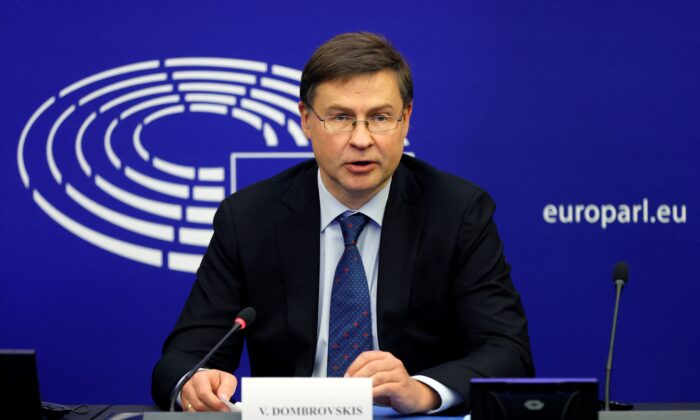 The European Union filed a complaint on Jan. 27 in the World Trade Organization (WTO) against communist China over discriminatory trade practices on behalf of its member state, Lithuania, regarding its relationship with Taiwan.

The move comes after China has launched what has come to be a literal economic embargo and a restriction of services against the small Baltic nation last month.

The EU filed a request to meet with PRC representatives in Geneva, having gathered what it sees as ample evidence from interviews with affected Lithuanian businesses over the past month.

The request is the first formal step toward a WTO case that is likely to drag on for years before a final decision is reached.

“These actions, which appear to be discriminatory and illegal under WTO rules, are harming exporters both in Lithuania and elsewhere in the EU, as they also target products with Lithuanian content exported from other EU countries,” said the EU in a statement.

“As attempts to resolve this bilaterally have failed, the EU has resorted to initiating dispute settlement proceedings against China.”

China had demanded that the EU not get involved with what it considers a mere bilateral dispute with Lithuania.

Last August, Beijing recalled its ambassador to Lithuania and demanded that it summon back its ambassador from Beijing in response to a Lithuanian decision to deepen ties with Taiwan, which the Chinese regime claims as a rogue province.

Lithuania permitted a Taiwanese diplomatic presence in its capital of Vilnius and agreed that the Taiwanese office would bear the name Taiwan instead of Chinese Taipei, which is the name used by most countries with relations with Beijing.

In December, China began imposing an import and export ban on Lithuania and put international pressure on companies in the EU to cease supply and logistics operations in the Baltic state.

The Chinese communist regime subsequently blocked goods from France, Germany, and Sweden that contained components made in Lithuania.

Lithuania’s exports to China dropped by more than 90 percent in December compared to the same month in the previous year.

The Chinese regime followed up with a declaration that any political moves in favor of Taiwan violated “the spirit of the communique on the establishment of diplomatic relations between China and Lithuania.”

China’s actions against Lithuania have been viewed by Brussels as an attack on the bloc’s single market, which Lithuania joined in 2004.

The trade bloc views any economic move against one member state as a trade attack against all.

The EU has officially protested the Beijing regime’s violation of WTO rules, in a letter sent by EU Ambassador to the WTO João Aguiar Machado to his Chinese counterpart Li Chenggang.

“These measures predominantly concern goods or services from or destined for Lithuania or linked in various ways to Lithuania, but also have an effect on supply chains throughout the EU,” said Machado.

“We also advise the EU to distinguish right from wrong, remain vigilant against Lithuania’s attempts to hijack China–EU relations, and persuade Lithuania, like other EU member states, to fulfill the political commitments it made as establishing diplomatic relations with China,” warned Zhao.

“We urge Lithuania to immediately correct its mistake,” he added.

“Launching a WTO case is not a step we take lightly. However, after repeated failed attempts to resolve the issue bilaterally, we see no other way forward than to request WTO dispute settlement consultations with China,” said Dombrovskis.

“The EU is determined to act as one and act fast against measures in breach of WTO rules, which threaten the integrity of our Single Market.”

“China is putting pressure on international companies to abandon the use of Lithuanian components in their production,” said Dombrovski, or “otherwise, they may face import restrictions.”

“We are in parallel pursuing our diplomatic efforts to deescalate the situation,” he added, but said that “our relationship requires mutual respect.”

“Let me be clear: these measures are a threat to the integrity of the EU single market so it affects the entire EU trade and EU supply chains, and they have a negative effect on EU industry.”

The Lithuanian government said it was grateful for the support from its allies.

“This step is a clear message to China that the EU will not tolerate politically motivated actions of economic coercion,” said Lithuanian Foreign Minister Gabrielius Landsbergis.

Beijing denies that it has involvement in directly pressuring international companies to abandon Lithuania and other related markets.

The EU slammed the denials as false, saying the measures “are attributable to China” and are most likely “in concert with the government,” said Machado.

Brussels says that it has ample evidence of China actively blocking Lithuanian and other European exporters from its market in violation of WTO rules.

The EU has said it will first formally ask Beijing for a consultation to clarify its actions against Lithuania, in order to settle the trade dispute.

The Chinese regime has the right to accept or reject the consultation designed to quickly arbitrate the dispute, without resorting to a drawn-out process before it heads to the WTO for a decision.