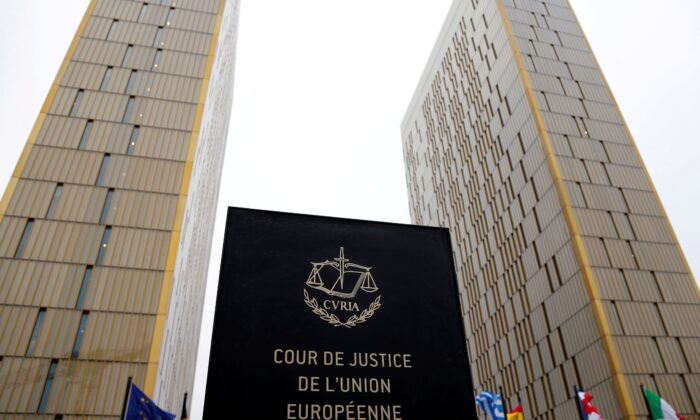 The towers of the Court of Justice of the European Union are seen in Luxembourg, on Jan. 26, 2017. (Francois Lenoir/Reuters)
Europe

WARSAW—Poland must pay 1 million euros ($1.16 million) a day for maintaining a disciplinary chamber for judges, the European Union’s top court said on Wednesday, in the latest episode of a clash over the rule of law with implications for Warsaw’s future ties with the bloc.

The long-running conflict over Poland’s judicial reforms that the bloc says undermine the independence of the courts deepened this year, raising questions over the future place of the EU’s largest eastern member in the union.

“In the ruling issued today, the Vice-President of the Tribunal obliged Poland to pay…a penalty payment of EUR 1 million per day, counting from the date on which this ruling was delivered to Poland,” the statement from the Court of Justice of the European Union (CJEU) read.

Poland has said it will abolish the chamber as part of broader reforms, but has not yet presented detailed plans.

The Court of Justice of the European Union has already fined Poland 500,000 euros a day for defying a court ruling to halt operations at the Turow coal mine on the Czech border.

Poland has vowed to continue operations and has said it will not pay the penalties related to the mine.

A government spokesman did not immediately respond to a request for comment on whether Poland would pay the latest fine.

However, spokesman Piotr Muller wrote on Twitter: “The path of punishments and blackmail towards our country is not the right one.”

“The CJEU completely disregards and ignores the Polish constitution and the judgments of the Constitutional Tribunal,” he wrote on Twitter.

Ruling nationalists Law and Justice (PiS) say the European Union executive, the European Commission, is overstepping its mandate by trying to stop its judicial reforms.

At the request of Prime Minister Mateusz Morawiecki, Poland’s Constitutional Tribunal examined whether certain elements of the EU treaties were compatible with the Polish constitution.

Earlier this month, the Tribunal said they were not, in a ruling critics said created an existential problem for the bloc by questioning the primacy of EU law, a tenet of European integration.