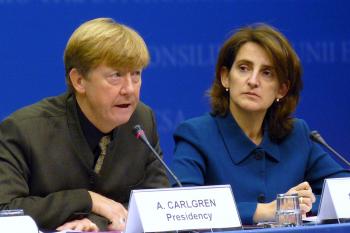 Ribera will be one of the front figures leading climate change discussions when Spain chairs the EU presidency for the next six months.

However, she was pessimistic about achieving an agreement in the near future. At a press conference she said it was an impossible feat for Spain.

The failure to reach an agreement in Copenhagen shows that the EU’s negotiation and decision-making structure is ineffective and requires change, according to Ribera. She suggested that the EU should not be satisfied in just making proposals but also utilize specific tools like financing, setting carbon markets, and getting involved in improvement, and adjustment work.

“So far the figures they put forward lack information to evaluate what they actually meant,” she said.

“The EU will of course continue to strive for an agreement that is legally binding for all parties,” said Andreas Carlgren, the Swedish environment minister at the press conference.

Stavron Dimas, the EU chief for Environment, said that Europe’s ambition in fighting climate change will give the region an advantage of higher competitiveness over other countries, and a “low carbon future” is inevitable.

The Copenhagen climate change summit in December resulted in a vague note of agreement, in which rich countries committed themselves to financial measures in developing countries.

Discussions on how to proceed with the issue will be held at a meeting of environment ministers in Seville on Jan. 15–17, 2010.