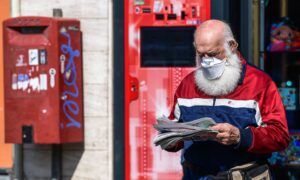 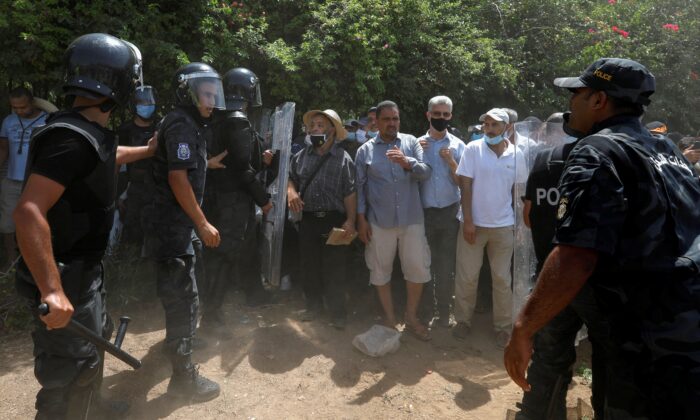 Police officers hold back supporters of Tunisia's biggest political party, the moderate Islamist Ennahda, as they attempt to reach the Parliament building in Tunis, Tunisia, on July 26, 2021. (Zoubeir Souissi/Reuters)
Europe

EU Calls on All Tunisian Actors to Respect Constitution, Rule of Law

BRUSSELS—The European Union on Monday urged all political actors in Tunisia to respect the country’s constitution and avoid violence after Tunisia’s president ousted the government and froze Parliament with help from the army.

“We are closely following the latest developments in Tunisia,” a spokeswoman for the European Commission said.

“We call on all Tunisian actors to respect the Constitution, its institutions, and the rule of law. We also call on them to remain calm and to avoid any resort to violence in order to preserve the stability of the country,” she said.

Tunisia faced its worst crisis in a decade of democracy on Monday after President Kais Saied ousted the government and froze parliament with help from the army in a move denounced as a coup by the main parties including Islamists.

It follows months of deadlock and disputes pitting Saied, a political independent, against Prime Minister Hichem Mechichi and a fragmented Parliament as Tunisia has descended deeper into an economic crisis exacerbated by the COVID-19 pandemic.

Parliament Speaker Rached Ghannouchi, the head of the moderate Islamist Ennahda party which has played a role in successive coalitions, decried it as an assault on democracy and called on Tunisians to take to the streets in opposition.