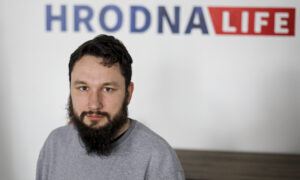 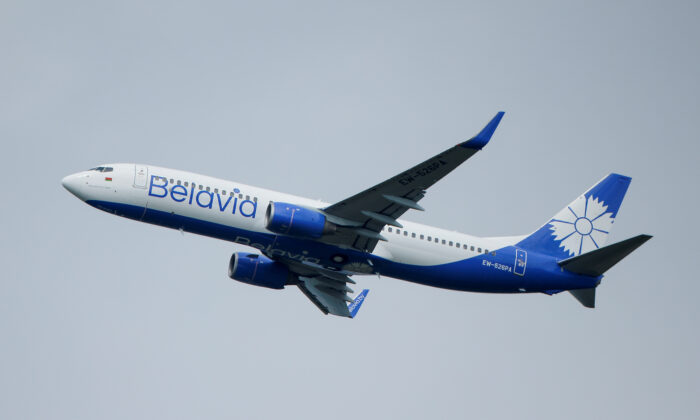 A Boeing 737-800 plane of Belarusian state carrier Belavia takes off at the Domodedovo Airport outside Moscow on May 28, 2021. (Maxim Shemetov/Reuters)
Europe

BRUSSELS/WARSAW—Belarus carriers will be banned from flying over European Union territory or having access to its airports from Friday, the bloc said, as the country’s exiled opposition leader called for more joint Western sanctions.

The EU decision is part of planned punitive measures against Belarus in response to Minsk scrambling a warplane to force the landing on May 23 of a Ryanair flight carrying an opposition journalist, who was then arrested.

The move is due to take effect at midnight Central European Time, and requires EU member states “to deny permission to land in, take off from, or overfly their territories to any aircraft operated by Belarusian air carriers,” EU governments said in a statement.

The ban also includes marketing carriers, which sell seats on planes operated by another airline as part of a code-share agreement.

However, the EU and NATO believe the forced landing of the flight from Athens to Vilnius to arrest journalist Roman Protasevich and his girlfriend amounted to state piracy and must not be tolerated.

Belarusian President Alexander Lukashenko has said Protasevich was plotting a rebellion and accused the West of waging a hybrid war against him.

National carrier Belavia flies to some 20 airports in Europe including in Germany, France, Italy, and Austria.

Enforcement of the ban on Belarus carriers will fall to national EU governments, many of whom are also members of NATO, who can scramble fighter jets to protect their air space.

Speaking in Poland, opposition leader Sviatlana Tsikhanouskaya, who fled Belarus for Lithuania following disputed presidential elections in August 2020, told Reuters that the Group of Seven countries should work together to impose new sanctions.

Leaders of Canada, France, Germany, Italy, Japan, Britain, and the United States are expected to discuss Belarus on June 11, but host Britain has not yet accepted a French call to invite the Belarusian opposition to the event.

“Pressure is more powerful when these countries are acting jointly and we are calling on the UK, the USA, the European Union, and Ukraine,” Tsikhanouskaya said.

EU governments say they are looking at targeting sectors that play a central role in Belarus’ economy, to inflict real punishment on Lukashenko. They could include bond sales, the oil sector, and key export potash.

However, the bloc is expected to agree by June 21 to a smaller sanctions list on individuals and two entities as a quick, intermediary response, according to diplomats.

Tsikhanouskaya said the opposition has become more concerned about security since the Ryanair incident, and that they would try to provide more security training to those in exile.

“I think that we started to pay more attention to security but again this is the strategy of the regime, to threaten people, to make them uncomfortable,” she said.