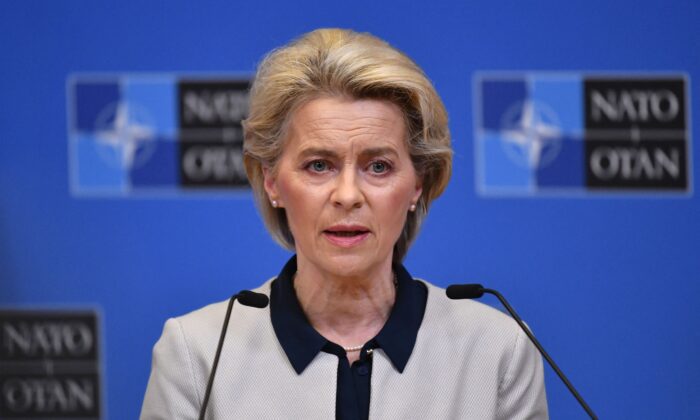 The European Union, at an emergency overnight summit, approved a package of “massive and targeted” sanctions on Russia.

The move comes after Russia mounted an invasion and attack on Ukraine on Thursday via land, air, and sea, after Russian President Vladimir Putin announced a “special military operation.” As of late Thursday, at least 137 people have been reported killed in the attacks.

The financial sanctions will “cut Russia’s access to the most important capital markets,” she said. “We’re now targeting 70 percent of the Russian banking market, but also key state-owned companies including the field of defense. And these sanctions will increase Russia’s borrowing costs, raise inflation, and gradually erode Russia’s industrial base.”

For the second pillar, the energy sector, the EU’s export ban “will hit the oil [sector] by making it impossible for Russia to upgrade its oil refineries—which actually gave Russia export revenues of 24 billion euros in 2019,” von der Leyen said.

The EU will also be banning the sale of all aircraft spare parts and equipment to Russian airlines. “This will degrade the key sector of Russia’s economy and the country’s connectivity—three-quarters of Russia’s current and commercial air-fleets were built in the European Union, the U.S., and Canada, and therefore they are massively depending on that.”

And fifth, “diplomats and related groups and business people will no longer have privileged access to the European Union,” von der Leyen said.

Details of the sanctions are to be worked out in the coming days.

Analysts say Russia’s invasion of Ukraine may cause U.S. gas prices to rise to $4 a gallon.