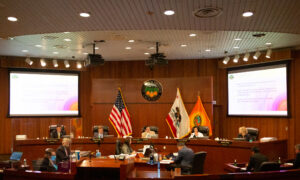 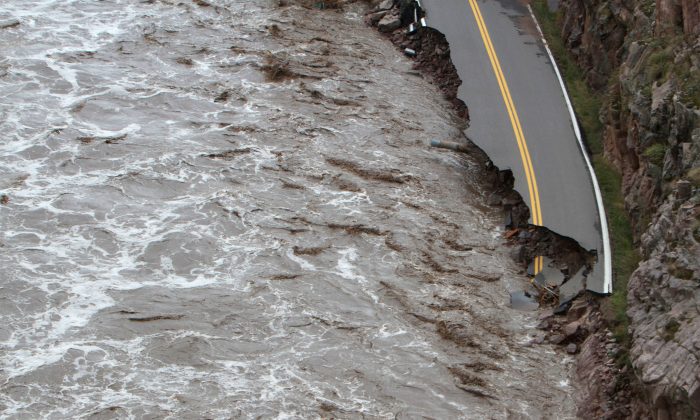 This aerial photo shows Highway 34 being destroyed toward Estes Park , Colo. as flooding continues to devastate the Colorado Front Range and thousands are forced to evacuate with an unconfirmed number of structures destroyed Friday, Sept. 13, 2013. (AP Photo/Colorado Heli-Ops, Dennis Pierce)
US

Parts of Highway 66 have started to crumble at Aspen Brook and Dunraven Inn, near the southwestern area of town, according to the city.

Several others roads have been opened to emergency personnel and residents–State Highway 119 north and Trail Ridge Road, or Highway 34.

However, parts of Highway 34 have crumbled from floodwaters, seen in the pictures above.

Here are the current road closures:

-State Highway 7 is closed between Lyons and Estes Park

-U.S. 34 is closed between Glade Road and Estes Park; eastbound from Granby to Estes Park is for essential travel only (checkpoints are in place)

-U.S. 36 between Boulder and Estes Park is closed

Here are the roads that are closed in and near Estes Park. http://t.co/PCgmOnlOOF #coflood http://t.co/BRJol11UeZ

Here’s a zoomed out picture of the roads closed into and out of Estes Park. http://t.co/PCgmOnlOOF #coflood http://t.co/p9Bs5MsjBf

At the town meeting on Saturday morning, the following estimates were given by the Colorado Department of Transportation for fixing the roads, according to one local:

Meanwhile, people are encouraged to check on their neighbors amid the flooding and make sure they are okay.

Some areas of the town have been evacuated, and the evacuation center is at Mountain View Bible Fellowship Church. The Estes Park Conference Center at 101 South Saint Vrain Avenue is for overflow.

Other evacuated areas are: low-lying properties around all rivers from the U.S. 34/36 intersection west through town and west down the Big Thompson and Fall Rivers in Estes Park, and the Highway 66 corridor beyond Aspen Brook/Dunraven Inn.

Meanwhile, properties further east from Fish Creek Road including Dunraven Heights, Windham Lane, Johnson Lane and adjacent roads, the Uplands and Rockwood Estates and others are being contacted by emergency services personnel to assess special needs and assist them in evacuating.

Estes Park School buildings opened on weekdays starting Monday to care for and feed children. Students “are not required to attend but the schools want to be available as a resource. Buses will not run.”

Some properties along Fish Creek will continue to be without water until that can be restored.

There’s a “no flush” zone in the Upper Thompson sanitation district. See it here.

The historic flooding appears to be over after days of either rain or forecasts of possible rain.

Still, there is lots of cleaning up to do after the heavy flooding.

The nearby Rocky Mountain National Park is still closed.

See videos below the Storify.