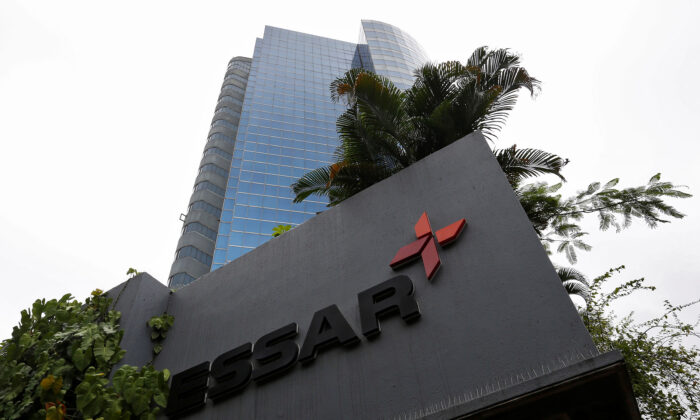 The logo of Essar group is seen at its headquarters in Mumbai, India, on Aug. 21, 2017. (Danish Siddiqui/Reuters)
UK

Reuters—Essar Oil UK, the operator of Britain’s Stanlow oil refinery, is in talks with UK authorities over extending a January deadline to repay hundreds of millions of pounds in deferred taxes, the company said on Sunday.

The company had agreed to an accelerated schedule with HMRC to make the rest of the payment, which it has not been able to meet due to a slower than expected recovery from the pandemic.

In a statement to Reuters, Essar said it is in discussions with HMRC over a “short extension” to make the deferred VAT payments.

“Those discussions are positive and EOUK looks forward to a resolution soon,” it added.

It also said that the company had returned to positive EBITDA (earnings before interest, taxes, depreciation, and amortisation) and therefore is in a “much stronger position to weather the continued challenge presented by the pandemic.”

Essar in May secured more than $850 million in financing for the Stanlow refinery after hitting short-term financial difficulties.

Lengthy queues of vehicles have been snaking their way to gas stations in Britain where an acute shortage of truck drivers has led to fuel rationing in a number of garages and some pumps running dry, and prompted the government to consider issuing temporary work visas.