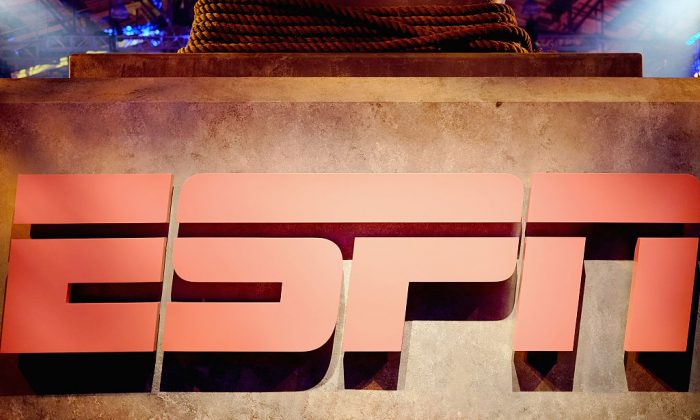 A view of the logo during ESPN The Party in San Francisco, California, on Feb. 5, 2016. (Mike Windle/Getty Images for ESPN)
Entertainment News

ESPN to Lay Off 150 Staff in Latest Round of Cuts

John Skipper, the president of ESPN announced on Wednesday morning, Nov. 29, that the network will be terminating around 150 employees.

In a memo posted by the network, Skipper wrote to staff that he appreciates their contributions in this “difficult moment.”

Fox News pointed out that Wednesday’s latest round of layoffs brings the total number of employees terminated in 2017 to 250.

The latest cuts make up about 2 percent of ESPN’s total workforce, according to CNN.

The full statement from Skipper can be seen below:

Today we are informing approximately 150 people at ESPN that their jobs are being eliminated.

We appreciate their contributions, and will assist them as much as possible in this difficult moment with severance, a 2017 bonus, the continuation of health benefits and outplacement services. They will also appreciate your support.

The majority of the jobs eliminated are in studio production, digital content, and technology and they generally reflect decisions to do less in certain instances and re-direct resources.

We will continue to invest in ways which will best position us to serve the modern sports fan and support the success of our business.

An unnamed source who had information on the situation told Fox News that recent layoffs were made to “consolidate resources” at the sports company.

Back in April, ESPN let go of several veterans of the network as part of a layoff that impacted 100 on-air personalities and writers, CNN reported.

According to the Washington Post, it’s the network’s third round of job cuts in the past two years.

However, the unnamed source stressed that even though 250 employees were laid off this year, the company is still hiring in some departments.

“There are a number growth initiatives going on [at ESPN],” the source told Fox News.

It’s not clear as to what extent the layoffs are connected with the NFL’s national anthem protests where players knelt, sat on the bench, or even raised a fist during the playing of The Star-Spangled Banner. As a result, many fans started to boycott the league and stop watching the network.

Former San Francisco 49ers quarterback Colin Kaepernick started the controversy last year by first sitting on the bench, then later kneeling during the national anthem. He told NFL.com last year he’s “not going to stand up to show pride in a flag for a country that oppresses black people and people of color.”

Many critics have said that protesting during the anthem is misdirected and disrespectful to the country itself, especially to members of the military who have died to protect it and the flag. Some have also said that NFL games are neither the venue nor the time to protest, as football has generally, until recently, been a place where the public can put aside their political views.