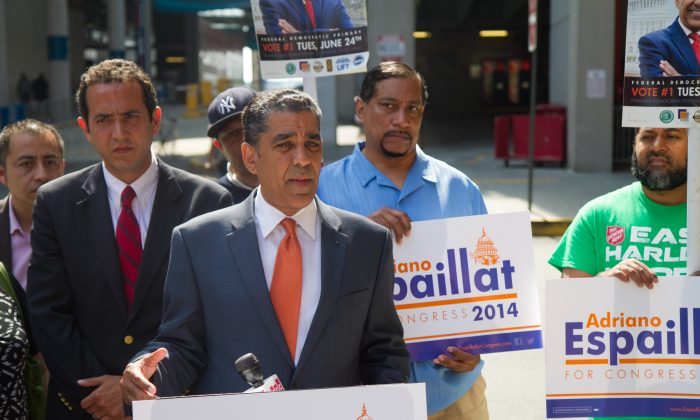 State Sen. Adriano Espaillat, who is running for Congress in 2014, speaks about his plans for economic reform at the East River Plaza, in Manhattan, on Wednesday, June 4, 2014. Espaillat promised to concentrate on immigration reform if elected as Congressman at a morning campaign event. (Jonathan Zhou/Epoch Times)
New York

Espaillat is running to unseat longtime Congressman Charles Rangel in the Democratic primaries in June.

Speaking at a morning campaign event before a packed audience of largely Spanish speaking New Yorkers at the Agua Fresca restaurant in East Harlem, Espaillat criticized the Obama administration for deporting a record number of immigrants who have entered the country illegally.

“We are now seeing more deportations than ever before, and they’re ripping families apart. For a simple parking infraction someone could be stopped and be on the road to deportation. We have to do better for our immigrant community,” he said. An executive order by the president could stop the deportations, Espaillat added.

Espaillat tied the topic of immigration together with economic reform. He argued that the local economy would be revitalized by the work ethic of immigrants. He also praised local business owners.

“I commend the Mexican-American business community for their gut, their energy, and their nonstop attitude about moving forward,” Espaillat said. “The immigration reform bill is perhaps the best economic development plan for this country,” referring to the 2013 Senate bill that would offer a path to citizenship for the 12 million people living in the country without documents.

Espaillat recounted his previous efforts to help immigrants, from teaming up with a lawyer to prevent a soldier from being deported to fighting for the rights of undocumented students to pay in-state tuition at CUNY; and he promised to personally lobby President Barack Obama to stop deportations.

“Rather than pressure [Obama], I will persuade him, as an immigrant and someone who came here. At one point I didn’t have my papers; we came here on a visitor’s visa and we had to go back to get our green cards. I could tell you firsthand how it is to be a child and know that you don’t have any papers,” he said.

On Monday, Mayor Bill de Blasio, who had managed Rangel’s re-election 20 years ago, refused to endorse any candidate in the congressional primaries.