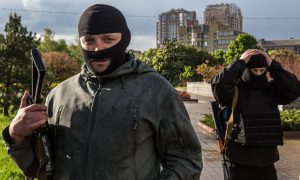 WASHINGTON—The federal government’s official report is out now on whether or not our intelligence agencies mishandled the information they had on the primary suspect Tamerlan Tsarnaev before the Boston Bombing. The report, “Unclassified Summary of Information Handling and Sharing Prior to April 15, 2013 Boston Marathon Bombings,” addresses whether the agencies had learned the lessons from 9/11 and shared information with one another.

The report is a joint effort of four Office of Inspectors General (OIG) from the Department of Justice, CIA, Department of Homeland Security (DHS), and the Intelligence Community (IC).

While the agencies responsible for the security of the nation absolve themselves from any critical mistakes made, the report and oral testimony provide ample evidence that the sharing of information should have been better.

The great majority of the findings of the report the public will never see. A classified 168-page report was prepared for Congress on April 10. An unclassified 26-page summary report was released to the media and the public on the same day.

Several parts of the unclassified version have been redacted.

On April 30, the Inspectors General testified before the Senate Homeland Security and Governmental Affairs Committee in open and closed sessions to answer questions from senators.

The basic facts regarding the bombings and the suspects are these. On April 15, two pressure cooker bombs were detonated seconds apart near the finish line of the Boston Marathon, killing three and injuring over 260. Many of the injured had to have legs or arms amputated. Another death occurred three days later when a policeman in Watertown, Mass. was killed by one of the suspects. In that shootout, Tamerlan Tsarnaev was shot and soon died. His brother Dzhokhar fled and was apprehended the next day, and awaits trial.

Two years prior to the Boston Marathon bombings in March 2011, Russia’s Federal Security Service (FSB) informed the FBI that Tamerlan and his mother Zubeidat were radical jihadists and that Tamerlan was planning to join the underground in Dagestan and Chechnya.

The FBI did what is called an assessment. The FBI closed the case after three months on June 24, 2011, concluding that Tamerlan did not have links to terrorism. The report says that the FBI would have reopened the case if new information from a foreign government found a “nexus” between Tsarnaev and terrorism.

The FBI did not share the information on Tamarlan Tsarnaev it received from the FSB with the CIA.

In the fall of 2011, the FSB contacted the CIA and gave substantially the same information that it had provided the FBI. In October, 2011, the CIA provided this information to the National Counterterrorism Center, which added Tamerlan Tsarnaev to the terrorist watchlist used by the FBI, DHS, and Department of State.

Three months later in January 2012, Tamerlan went to Russia, which was what the FSB had said he was intending to do. “However, Tsarnaev’s travel to Russia did not prompt additional investigative steps to determine whether he posed a threat to national security,” states the report.

As the federal government’s lead domestic counterterrorism agency, the FBI had the lead role in assessing “whether Tamerlan Tsarnaev had a nexus to terrorism or posed a threat to the national security in 2011, two years prior to the April 15, 2013 Boston Marathon bombings.”

The FBI investigation in 2011 was conducted through the Boston JTTF (Joint Terrorism Task Force).

The report notes that the FBI “did not coordinate with or notify the CIA in March 2011” after receiving the information of Tamerlan Tsarnaev from the Russian FSB, which informed the CIA in September.

“Why isn’t it that the FBI would not notify the CIA … as opposed to having a foreign government waiting to actually notify an agency in our own government?” asked Sen. Kelly Ayotte (R-N.H.) at the hearing.

The Inspector General of the Department of Justice (which oversees the FBI) Michael Horowitz answered Ayotte that the FBI should have notified the CIA. He said there’s already a memorandum in place that should have been followed.

The report states that it could not be determined whether the Special Agent who conducted the FBI assessment was ever notified that Tsarnaev made a trip to Russia (page 21).

The Special Agent did interview Tsarnaev and his parents, but failed to ask about “Tsarnaev’s plans to travel to Russia, changes in lifestyle, or knowledge of and sympathy for militant separatists in Chechnya and Dagestan.” The Special Agent “told the DOJ OIG that he did not know why he didn’t ask about plans to travel to Russia…” The rest of the sentence is redacted.

The FBI did not make a deliberate effort to share their information with local and state law enforcement prior to the bombings, but the latter would have had access to the agent’s assessments in the Guardian system, states the report.

Appearing before the same Senate committee in July 2013, Boston Police Commissioner Edward F. Davis III complained that the Justice Department did not inform his police department that Tamerlan Tsarnaev made a six-month trip to Chechnya one year before the bombings, according to the Associated Press.

“The DOJ OIG recommends that the FBI consider sharing threat information with state and local partners more proactively and uniformly by establishing a procedure for notifying state and local representatives on JTTFs when it conducts a counterterrorism assessment of a subject,” states the report.

The Russians had Tsarnaev’s birthdate wrong twice and a different spelling of the name. Eventually this led to four different entries in the Customs and Border Protection (CBP) watchlist for Tsarnaev.

The report states that Tsarnaev’s travel to Russia in 2012 “was significant” in view of the FSB warning and “warranted further investigative action.”

Inspector General of the Intelligence Community Charles McCullough III, summing up all the testimony, said, “There were errors, there were inaccuracies, and we’ve made some recommendations and drawn some conclusions to address these. But at the end of the day… there’s not a single event, or singular event, or series of events that we can say had this happened, that would have… stopped the bombing. We didn’t find anything like that.”