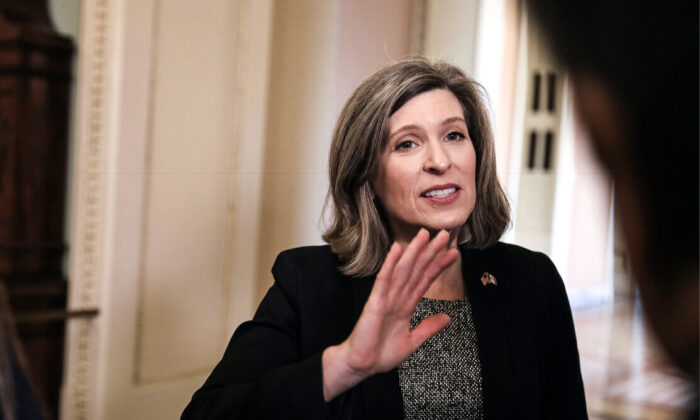 Sen. Joni Ernst (R-Iowa) talks to media during a break in the closing arguments of the impeachment trial of President Donald Trump in Washington on Feb. 3, 2020. (Charlotte Cuthbertson/The Epoch Times)
US

The Iowa Republican told George in an Aug. 24 letter that her request was prompted by the fact that “earlier this month, Congress passed and Biden signed legislation to double the size of the IRS workforce so the agency can more aggressively audit America’s taxpayers.

“The nonpartisan Congressional Budget Office (CBO) says with the supersized staff, the IRS audit rate ‘would rise for all taxpayers,’ regardless of income, which will ‘result in some audits of taxpayers who would later be determined not to owe additional taxes.’”

Among the results of adding 87,000 new IRS agents to the 80,000 the agency presently employs, Ernst said, could be that “innocent, hardworking Americans” will be “subjected to unfair and costly IRS audits when the agency is ignoring tax cheats on its own payroll.”

Ernst was referring to reports compiled and published by TIGTA investigators in 2017 and 2019 that found the IRS had hired and rehired thousands of employees who had not paid their taxes.

“In April 2019, TIGTA released a report, ‘Improvements Are Needed to Ensure That Employee Tax Compliance Cases Are Adjudicated Consistently,’ that found 1,250 IRS employees had not paid their tax bills in full or on time, including hundreds of whom, were willfully delinquent or repeat offenders, and that the tax collecting agency had done little to discipline these tax cheats on its own payroll,” Ernst told George.

“A 2017 TIGTA review, ‘The Internal Revenue Service Continues to Rehire Former Employees With Conduct and Performance Issues,’ found that the IRS rehired hundreds of former employees who ‘had been terminated from the IRS or separated while under investigation for a substantiated conduct or performance issue.'”

The rehires included some who were fired or resigned for “willful failure to properly file their federal tax returns,” Ernst continued.

In a separate statement in which Ernst announced she is giving the IRS her latest Squeal Award, the Iowa Republican said that among the excuses the IRS tax cheats offered to investigators were not knowing how to use TurboTax to prepare a tax return and forgetting to report all of their income.

“We have a real problem if the IRS staff who enforce the tax law aren’t paying their own taxes and can’t even understand how to properly fill out the agency’s tax forms!” Ernst said in the statement. “I’ve heard enough of the excuses and these Washington double standards.

“The IRS needs to start living under its own rules and that’s why I am demanding that we audit the IRS!”

The statement said Ernst selected the “soon-to-be supersized IRS” for the award because she fears the tax agency will be “going after hardworking taxpayers while ignoring the tax cheats on their own payroll.”

A TIGTA spokesman declined to comment on the Ernst letter.

Biden’s plan to more than double the IRS workforce would likely be controversial at any time, but debate on it in Congress and the media was made even more intense because the agency has struggled in recent years to process paper tax returns efficiently and quickly.

National Taxpayer Advocate Erin Collins told Congress earlier this year that little progress has been made by the IRS in dealing with a mounting backlog of unprocessed tax returns.

“At the end of the 2022 filing season, the IRS and taxpayers still faced long delays in processing paper original returns, electronic returns with inconsistencies, and electronic and paper-filed amended returns, as well as the backlog of correspondence the IRS still needed to address from 2021 plus the 2022 correspondence.

“The high level of backlog and the corresponding delays have strained the IRS, its employees, and most importantly, taxpayers,” Collins wrote.