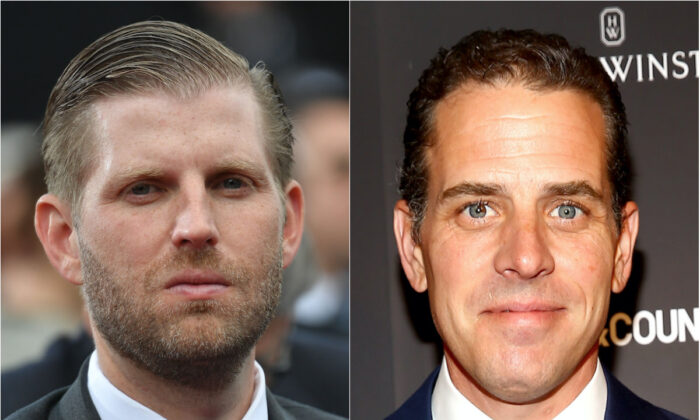 Eric Trump Slams Hunter, Joe Biden: ‘Why Is It That Every Family Goes Into Politics and Enriches Themselves?’

Trump said during an appearance on Fox News’s “Justice” over the weekend.

“They’re fighting all of this, yet they have a candidate that lies about being Cherokee Indian when she’s one one-thousandth and twenty-fourth Cherokee,” he said, referring to Sen. Elizabeth Warren (D-Mass.), before talking about Joe Biden.

“You have a guy whose son is embezzling money from everybody and enriching himself off of, you know, his father’s position under–”

“So, then where does Joe Biden get off being so pompous and above it all?” host Jeanine Pirro interjected.

“Well, you know, I think American people are gonna see that. He is pompous and they are above it all. And if I was doing the same thing that that family was doing, I’d be in jail,” Eric Trump alleged.

Biden in 2018 bragged during an event that while vice president in 2016, he threatened to withhold $1 billion in aid from Ukraine unless the country’s leadership ousted top prosecutor Viktor Shokin, who was probing the energy company Burisma. Hunter Biden sat on the board of Burisma from 2014 to 2019. He also joined a Chinese firm while his father was still in office.

Shokin was ousted, he said, because he didn’t want to close the investigation into Burisma. Then-President Petro Poroshenko cited Joe Biden when he asked Shokin to resign, the former prosecutor said.

“Why is it that every family goes into politics and enriches themselves?” Eric Trump said during the Fox appearance.

He said that his family “stopped at doing deals” when his father became president.

The talking point has circulated among Trump’s campaign in recent days.

Donald Trump Jr., President Trump’s other adult son, said during a recent appearance on Fox that the main difference between his family and the Biden family was the timing of their business deals.

“You know what the difference between the Bidens and us are?” Trump Jr. said. “We were international business people before politics, and we gave up doing all new deals going forward.”

“Let me tell you the difference between the no-show Bidens and us—we were international business people before politics, and we gave up all new deals going forward,” Trump Jr. remarked.

Hunter Biden has defended his work in Ukraine and China, alleging there’s no evidence of wrongdoing.