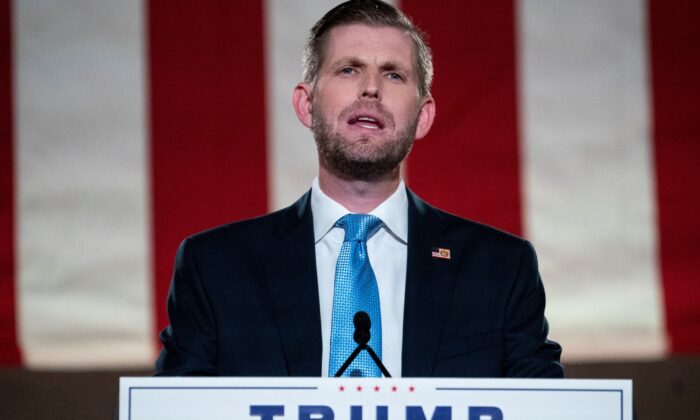 Eric Trump said a personal safe they claim was breached by a group of FBI agents in a raid on the former president’s Mar-a-Largo estate on Monday was empty.

“To have 30 FBI agents, actually more than that, descend on Mar-a-Largo, give absolutely no notice, go through the gate, start ransacking an office, ransacking a closet, you know—they broke into a safe. He didn’t even have anything in the safe,” the younger Trump told Fox News Sean Hannity on Monday.

Eric declared that the raid was conducted to see whether his father possessed any potential confidential documents from his time in office. He also said the breach was likely politically motivated because Democrats don’t want his father to run again for president in 2024.

“They started coming after him … the day he won [in] 2016,” Eric told the network, referencing Donald Trump becoming a politically motivated target.

“It’s gone on past politics,” the second son of the 45th U.S. president added. “Look at the attorney generals, … district attorney’s all over the country—all they want to do is, they want to get Donald Trump.”

“And they do it for one reason,” he noted. “Because they don’t want Donald Trump to run and win again in 2024.”

In the Monday interview, Eric said he was the one who informed his father in a call about the FBI’s unannounced search of the former president’s Mar-a-Largo estate.

Trump announced in a statement late on Aug. 8 that his Florida property was “under siege” and “occupied by a group of FBI agents,” calling it evidence of “prosecutorial misconduct” and a “weaponization of the Justice System.”

“After working and cooperating with the relevant Government agencies, this unannounced raid on my home was not necessary or appropriate,” Trump said in a post on Truth Social, adding that the feds “broke into my safe!”

Earlier this year, Trump returned 15 boxes of records kept at the Mar-a-Largo resort to the National Archives and Records Administration (NARA), which it said contained materials marked as classified national security information. Federal agents reportedly searched for additional documents at the property on Monday.

Lara Trump, the former president’s daughter-in-law, said on Fox News’ “Tucker Carlson Tonight” that everyone “from my father-in-law’s team has been cooperating with the FBI, with any authority that asks for anything up until now,” noting that there was no need for an unannounced raid.

“My father-in-law, as anybody knows who’s been around him a lot, loves to save things like newspaper clippings, magazine clippings, photographs, documents that he had every authority … to take from the White House,” she told the show. “And again, he’s been cooperating every single step of the way.”

A White House official told The Epoch Times via email that it was not informed ahead of time of the FBI’s raid on Mar-a-Lago.

The Department of Justice, of which the FBI is a part, has not responded to a request for comment. The FBI has also declined to comment.