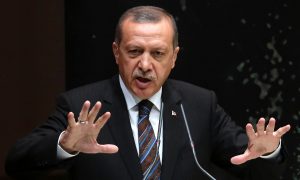 Turkish President Erdogan’s May 2013 plan to raze Gezi Park in Central Istanbul and replace it with a replica 19th century Ottoman barrack prompted anti-government protests in Istanbul and other cities across Turkey, which led to violent confrontations where the police used disproportionate force.

Thousands of demonstrators were injured, and thousands more faced legal proceedings and lost their jobs. Some defendants were charged with terrorism offenses (many are still on trial) and many others spent up to 10 months in detention before being bailed out.

I believe that the Gezi Park incident was a historic turning point marking the beginning of the end for Erdogan’s political fortunes.

What appeared to be a reaction to Erdogan’s plan was in fact triggered by a much deeper and long-simmering public resentment toward the Erdogan government. The steady erosion of sociopolitical conditions, the growing restrictions on free speech, and the pervasiveness of the governing Justice and Development (AK) Party created deep anxiety and fear among the general public.

They witnessed the gradual transformation of their country from a democracy to a police state.

There are five dimensions that demonstrate how Erdogan has badly regressed from what would have otherwise been his great legacy.

The first is the social dimension in which, undoubtedly, Turkey made noteworthy progress between 2002 and 2010. In 2001, Turkey adopted the Accession Partnership that provided Ankara with a roadmap to bring about “democracy and the rule of law … human rights and protection of minorities” as a prerequisite for EU membership negotiations to begin.

The Parliament passed several laws to protect the rights of defendants and detainees, transfer supervision of civil society organizations from the police to civil authorities, institute judicial reforms, and guarantee freedom of speech. In addition, Turkey passed laws allowing Kurdish radio broadcasts, as well as providing the option for private Kurdish-language education.

However, these reforms begun to erode as Erdogan started to compromise on the progress that sustained his power base, all for the sake of amassing more power, while pushing ever more the Islamization of the country.

According to Human Rights Watch’s “World Report 2015,” the government increasingly betrayed its principles and committed violations, including unjustified prosecutions for alleged speech crimes, the “abusive” use of terrorism charges such as “membership of an armed organization,” prolonged pretrial detention (especially of journalists, students, and lawyers), and the systematic intimidation of any individual or party that objects to, or opposes, government policy, not to speak of the rampant corruption at the top.

Erdogan’s government increasingly betrayed its principles and intimidated any individual or party that objects its policy, not to speak of the rampant corruption at the top.

The second dimension is the political reforms that Erdogan has embraced, including changes in Turkey’s National Security Council (NSC) regulations to reduce the military’s omnipotent power over it by increasing its number of civilian members and appointing a civilian as secretary general, increased governmental transparency, and the abolishment of the State Security Courts.

In recent years, however, Erdogan started to freeze these political reforms and rob them of their essential purpose of developing a progressive form of democratic governance. He used a democratic façade to direct electoral authoritarianism, where politically motivated indictments detained nearly one-third of the high military brass, and government opponents were put under house arrest on trumped-up charges of conspiring to topple the government.

The third dimension is economic development, where the government aggressively embraced capitalism and, due to diplomatic openings in the global market (especially in the Middle East), managed to open several new markets for Turkish exports.

These efforts have accelerated economic growth to unprecedented levels in Turkey’s modern history. From the time the AK Party took power in 2002, Turkey’s per capita income almost tripled by 2011, with the GDP exceeding $774 billion that year, making it the 18th largest economy in the world.

That said, Turkey’s economic growth has not benefited the Turkish population equitably. Tens of millions of people still suffer from economic disparity. In 2012, the Turkish economy’s growth slowed to 2.2 percent, far behind the 9 percent growth of 2010 and 2011, a downturn that has seriously eroded Erdogan’s political base.

The fourth dimension is foreign policy, which was centered on the principle doctrine of ensuring “zero problems with neighbors” that Prime Minister Davutoglu (the then-foreign minister) espoused and worked diligently to implement.

Yet presently, the picture looks drastically different. There is hardly any neighboring country (and many others in the region) that Turkey does not have a problem with, including Armenia, Greece (over Cyprus), Iran, Iraq, Syria, Saudi Arabia, Israel, Egypt, and more.

Turkey has also strained its relations with the United States and the EU over their differing policy toward Syria and the campaign against ISIS. The irony is that while “zero problems with neighbors” requires political and diplomatic savvy to resolve problems, Erdogan largely opted for a confrontational approach.

The fifth dimension is the growing imbalance between Islam and democracy. By all accounts, the government has gone far beyond a healthy mix of religion and democracy. Erdogan has systematically embraced religiously oriented policies both domestically and within Turkey’s foreign relations. He favors any organization or country with strong Islamic credentials (such as Qatar and Hamas) over others, regardless of the conflicting issues involved.

Instead of striking a balance between a democratic form of government and Islam as the religion of the state, Erdogan’s deliberate abandonment of political and social reforms in favor of growing Islamic indoctrination (in contradiction to the republic’s founding principle) began to backfire. Erdogan badly underestimated the strength and popularity of Turkish secularism.

To be sure, Erdogan’s backsliding on all fronts has finally caught up with him. His successes during his first two terms seem to have blinded him. As a result, his ambition to change the constitution to grant him near-absolute power as president was overwhelmingly rejected by the electorate.

The Turkish public will do well to remember that only through the power of the ballot were they able to stifle Erdogan’s blind ambition, and by the wise use of the ballot in the future they can restore Turkey’s potential as a great democratic power and a significant player on the global stage.

Erdogan’s dream to preside as president during Turkey’s 100th anniversary in 2023 with near-absolute power and become the Ataturk of modern Turkey has now evaporated. His insatiable lust for power, arrogance, and the dictatorial manner by which he wielded his authority have finally done him in.

As Shakespeare once observed, “It is excellent to have a giant’s strength; but it is tyrannous to use it like a giant.”

Dr. Alon Ben-Meir is a professor of international relations at the Center for Global Affairs at NYU. He teaches courses on international negotiation and Middle Eastern studies. alon@alonben-meir.com