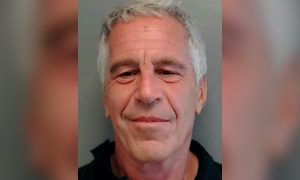 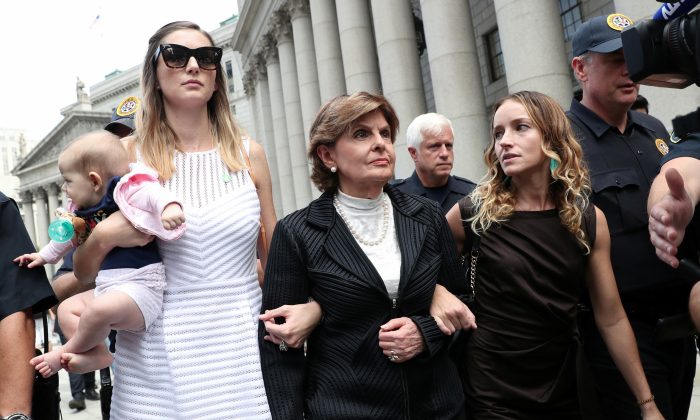 Gloria Allred (C), representing alleged victims of Jeffrey Epstein, leaves with Teala Davies and an unidentified women and baby after the hearing in the criminal case against Epstein, who died this month in what a New York City medical examiner ruled a suicide, at Federal Court in New York, on Aug. 27, 2019. (Shannon Stapleton/Reuters)
US News

Epstein’s Accusers Testify in Court in Wake of His Death

NEW YORK—Dozens of Jeffrey Epstein’s accusers—many allegedly abused when they were teenagers—testified in a Manhattan courtroom on Aug. 27 after federal prosecutors asked the judge to formally dismiss their case against the now-deceased financier.

The accusers, speaking one after another often through tears and trembling voices, testified about their reactions to Epstein’s suicide and spoke about how they first met the man. Many described how their lives were turned into a spiral of disarray and suffering after they were sexually abused by Epstein, who prosecutors say exploited and abused dozens of minor girls at his different residences.

Sixteen women testified in person to the court; some gave their names, others preferred to remain anonymous. Lawyers also read statements from seven other women who couldn’t, or didn’t want to speak publicly.

The hearing, which lasted for more than two hours, was a dramatic scene that occurred just weeks after Epstein killed himself in his cell. Epstein’s lawyers have said previously they are “not satisfied” with the autopsy results and have vowed to conduct their own investigation into his death.

U.S. District Judge Richard Berman described the hearing as “remarkable” in his final remarks to the court, following the testimonies.

Berman said he believed everyone had “benefited greatly” from listening to the accusers. The judge said he decided to give the victims a chance to testify, because of their “relevant experiences.”

Attorney General William Barr previously said that both the FBI and the Department of Justice’s inspector general were opening investigations into Epstein’s death.

A central point raised by many of Epstein’s accusers is that he robbed them of their innocence and their childhood. Some described how female associates of Epstein recruited them when they were very young and vulnerable. Many were suffering from poverty at the time they were brought into Epstein’s trafficking ring.

Courtney Wild, an accuser who used her real name, testified about being sexually abused by Epstein for years. She said his suicide “robbed our day in court to confront him” and stole her “innocence and mental health.”

“Justice has never been served in this case,” Wild told the court.

Other accusers urged federal prosecutors to go after the co-conspirators and enablers of Epstein. Some specifically mentioned bringing Ghislaine Maxwell to justice.

Maxwell, who is Epstein’s former girlfriend, a longtime associate, and purported madam, has denied claims she recruited and directed young girls to have sex with Epstein and other men.

“I will no longer cover up what needs to be brought to light,” one accuser, named Theresa Helm, testified. Helm said she was recruited 17 years ago from California and was brought to New York.

“Ghislaine Maxwell … they need to be held accountable,” Helm said. “All of them.”

None of the victims mentioned the names of other men they were forced to have sex with. They did describe how politicians, actors, and other powerful people were involved.

Another accuser, Virginia Giuffre, detailed how she was abused by Epstein for years. Giuffre’s name was listed in the nearly 2,000 pages of recently unsealed documents, in which she alleged Maxwell directed her to have sex with Epstein and others. Giuffre’s lawsuit against Maxwell ended in both sides agreeing to settle in 2017 for an undisclosed sum.

“When I was recruited by Maxwell, I thought I had been given a break,” Giuffre testified. “[Later] my hopes were dashed and my dreams stolen.”

Giuffre insisted that “the reckoning” doesn’t end with Epstein’s death and that “it will continue.”

Throughout the hearing, the alleged victims often turned toward federal prosecutors, thanking them for their treatment of victims or urging them to move forward vigorously in the case.

“Please, please finish what you started,” accuser Sarah Ransome told the court, as she turned to face the federal prosecutors. “We all know [Epstein] did not act alone.”

Attorney Bradley Edwards, who represented some of the victims in court, said the timing of Epstein’s death was “curious to us.”

“It makes it nearly impossible to get full justice,” he told the court. “There are a lot of people here who are sad today.”