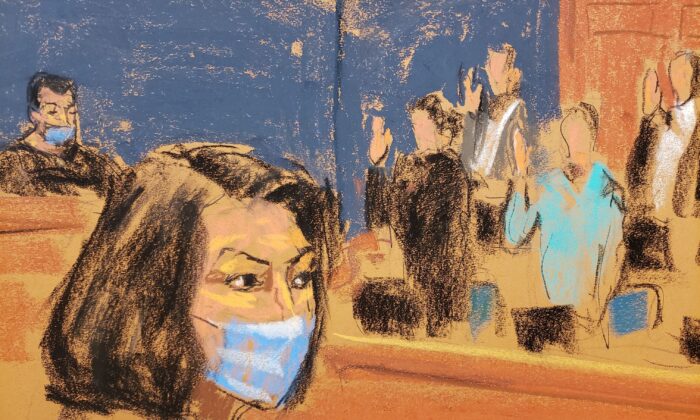 Ghislaine Maxwell sits as the jurors are sworn in at the start of her trial on charges of sex trafficking in a courtroom sketch in New York on Nov. 29, 2021. (Jane Rosenberg/Reuters)
Viewpoints

Epstein–Linked Pedophilia Is a Bigger Deal Than a Fake Insurrection

Ghislaine Maxwell stood up to address the court. The former cosmopolitan socialite was sentenced on June 28 to 20 years in prison for trafficking young women.

For years, Maxwell had delivered victims for sexual assault and childhood grooming to her billionaire boyfriend—proven pedophile Jeffrey Epstein.

The two were documented as flying countless underage girls to Epstein’s privately owned island, where they were sexually abused.

Even more alarming is the number of high-profile guests that accompanied the couple to what has come to be known as “Epstein Island”: Hollywood celebrities, U.S. politicians, and even a member of the British royal family all appeared in the flight logs of the aptly (and grossly) named “Lolita Express.”

As would be expected, every major media outlet focused on the groundbreaking case. The proceedings were aired on primetime television across all cable news networks, with the entire country encouraged to tune in. Apple sent a push notification to anyone who owned one of their products, letting them know that the consequential trial was beginning and where they could watch. U.S. nighttime talk show hosts focused each evening’s programming on the unraveling mystery of how such a sick and twisted gimmick was allowed to go on, entirely with the complicit—if not active—participation of prominent members of the ruling class.

That was all for the Jan. 6 Capitol breach show trials against former President Donald Trump.

In reality, the Maxwell case will be out of the already dimmed public spotlight of mainstream media outlets within the next week. Many U.S. citizens probably wouldn’t even recognize the name. Slightly more may know who Epstein was. All, however, will be aware that there’s a series of congressional hearings currently underway with the focus of investigating the former president for inciting an insurrection.

That’s because Maxwell—and the Epstein case in general—offer nothing of political advantage to the entrenched forces that currently wield power in the United States. Quite the opposite. Epstein Island is direct proof of the moral bankruptcy and generally shady nature of those we’re encouraged to regard as our U.S. aristocracy.

Claims have been made for years of widespread criminal behavior in the latter’s social circles. A few brave souls have devoted their lives to shining a light on this murky underworld. They’ve worked diligently through investigative journalism to expose the actions of these dark cliques—including the type of pedophilia that Maxwell stands convicted of enabling. Thanks to their tireless effort, as well as the rise of the internet and new forms of communication, the twisted operation on Epstein Island was finally exposed to the world.

This is embarrassing for the ruling class. In the past, those who control the media narrative have been able to sweep these types of allegations under the rug as the ramblings of conspiracy theorists. Money, power, and influence ensured that the kind of criminal behavior on Epstein Island remained under wraps from peering eyes on the outside.

Plenty of recognizable names were reputed to have previously kept the company of Epstein and Maxwell. Former President Bill Clinton is estimated to have taken the Lolita flight as many as 26 times. Epstein was reported to have visited the White House at least 17 times. Maxwell even attended his daughter Chelsea Clinton’s wedding.

Epstein was eventually arrested for sex trafficking in 2019. He allegedly committed suicide while awaiting trial. His death took place under shady circumstances, and many have speculated that there was foul play involved. It’s believed that he would have turned over the names of many high-level figures who he had connections with. Epstein’s suicide joins a long list of other unfortunate deaths of former Clinton associates.

There was still the expected campaign from many media outlets to reduce the magnitude of the Epstein revelations. Reuters “fact”-checking has previously come to the defense of elitist figures such as Bill Gates, dispelling claims that the fellow billionaire ever visited the island—although conceding far down into the piece that there was indeed a documented connection and frequent dinners between Gates and Epstein.

But there was one feature of the story that the piece made sure to hang on to—Epstein’s relationship with Trump. The billionaire socialite Epstein was a regular staple of ultra-wealthy circles, so it’s no surprise that he and Trump were acquaintances at one time.

“I knew him like everybody in Palm Beach knew him,” Trump told reporters in 2019.

What should be of more interest is why Trump so adamantly turned against Epstein while celebrities and politicians continued to visit the pedophile-fueled island.

It would instead seem that Trump came to despise Epstein for his questionable character. Unlike Clinton, Trump never made the trip to the island, and any flights he took on Epstein’s private jets occurred before Epstein’s initial conviction for soliciting a minor for prostitution.

Besides their personal relationship, Trump also is documented as having banned Epstein from his Mar-a-Lago resort in Florida. What precipitated this reaction? Of all things, because Epstein allegedly sexually assaulted a minor! Trump was also on video in 2016 calling out Clinton’s trips to Epstein’s “pedophile island,” nearly three years before the latter’s arrest and suicide.

This article isn’t meant to be a strict defense of Trump or any of his previous actions; instead, the facts stated above elucidate why the political establishment and their media enablers are attempting to “memory hole” the entire Epstein escapade.

The fact that it’s getting so little time on the airwaves should be enough to prove that there isn’t even close to enough evidence to condemn Trump—if there was, the entire corporate news world would be playing stories about it on a loop.

Instead, they’re preoccupied with the Jan. 6 Capitol breach and the notion that Trump is responsible for launching an insurrection against the U.S. government. The Jan. 6 commission is a political ploy, and its legitimacy is further deteriorating with examples such as the laughable Hutchinson testimony. Still, it provides an opportunity to construct a narrative against Trump from the careful manipulation of video, audio, and testimony that the Maxwell case just doesn’t offer.

The prosecution of Maxwell cuts at the heart of corruption in the U.S. political establishment and criminal behavior in the elitist echelons of power and wealth in our society. As such, it’s downplayed and ridiculed. It will shortly be forgotten by the same corporate media that tells us “democracy is under attack.”

These aren’t the types of issues that our media will investigate, because they don’t actively support the causes they support. In reality, they actually work to undermine the entire facade. The dichotomy of the Maxwell case with the Jan. 6 Capitol breach show trial is a perfect example of the fact that the current political environment and its media lapdogs don’t seek to report objective facts, support constructive dialogue, or certainly not defend “democracy” and the people’s public weal.

No, instead, what it proves, beyond a shadow of a doubt, is that there’s truly only one thing that concerns those who lord power over us: desperately clinging to that power at all costs.