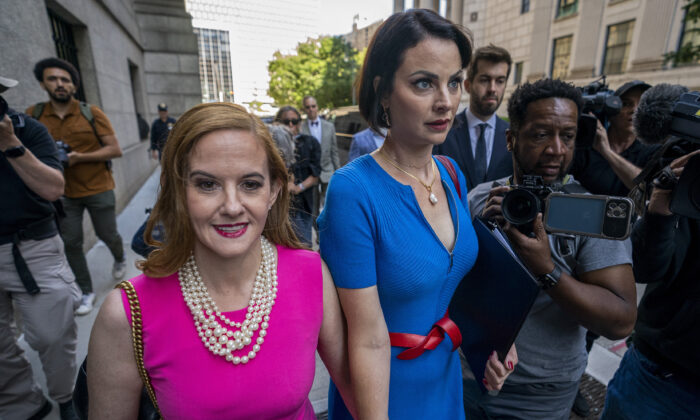 'For me, and for so many others, you opened the door to hell'
By Dave Paone

NEW YORK—Ghislaine Maxwell, once an international, jet-setting socialite and now a convicted sex trafficker, sat in federal court in Lower Manhattan one last time and was confronted by four of her victims before she was sentenced to 20 years in prison.

Under the Crime Victims’ Rights Act, victims are allowed to make “victim impact statements” on the day of sentencing.

Annie Farmer, who testified at the month-long trial in December, spoke first.

She began with, “For a long time, I wanted to erase from my mind the crimes that Ghislaine Maxwell and Jeffery Epstein committed against me and pretend they hadn’t happened.”

Moments later she said, “I blamed myself for believing these predators actually wanted to help me.

“I felt tremendous survivor guilt and when I heard what other girls and young women had experienced at the hands of Maxwell and Epstein, I saw how my sister’s concern about me weighed on her and felt guilty about that as well.”

Farmer said Maxwell “had many opportunities to come clean, but instead continued to make choices that caused more harm,” and how Farmer “feared being on Epstein and Maxwell’s radar because of their previous lies and threats.”

She ended with a plea to Judge Alison Nathan.

“I ask you to bear in mind how Maxwell’s unwillingness to acknowledge her crimes, her lack of remorse, and her repeated lies about her victims created the need for many of us to engage in a long fight for justice that has felt like a black hole sucking in our precious time, energy, and well-being for much too long now. These things cannot be replaced.”

Maxwell did not look at Farmer and sat motionless at the defense table.

A witness, who was known to the court only as “Kate” to protect her anonymity, spoke of Maxwell’s “lack of remorse” and how “every single child should have his innocence protected.”

Once again, Maxwell did not look at her victim.

Virginia Giuffre’s statement was read by her lawyer Sigrid McCawley.

She began with, “Ghislaine, 22 years ago, in the summer of 2000, you spotted me at the Mar-a-Lago Hotel in Florida and you made a choice. You chose to follow me and procure me for Jeffery Epstein.

“Just hours later, you and he abused me together for the first time. Together, you damaged me physically, mentally, sexually, and emotionally. Together you did unthinkable things that still have a corrosive impact on me to this day.

“I want to be clear about one thing: without question, Jeffrey Epstein was a terrible pedophile. But I never would have met Jeffery Epstein if not for you.

“For me, and for so many others, you opened the door to hell. And then, Ghislaine, like a wolf in sheep’s clothing, you used your femininity to betray us, and you led us all through it.”

A few minutes later she ended with, “I will never give up. I will never go away. If you ever get out of prison, I will be here, watching you, making sure you never hurt anyone else again.”

“I became, against my will, nothing more than a sex toy with a heartbeat and a soul for the entertainment of Epstein, Maxwell, and others.

“I was subjected to sexual predation multiple times per day, both in his New York mansion and on his private island in the U.S. Virgin Islands.

Later on she said, “Soon after lulling me and others into a false sense of security and comfort, they pounced, ensnaring us in their upside-down, twisted world of rape, rape, and rape.”

Ransome spoke of her two attempts at suicide.

She looked directly at Maxwell and said, “To Ghislaine I say, you broke me in unfathomable ways. But you didn’t break my spirit, nor did you dampen my internal flame that now burns brighter than ever before.”

Elizabeth Stein did not testify at the trial but commuted to it from her home in Philadelphia nearly every day.

Her statement was the most emotional of the four. She recapped her time with Maxwell and Epstein, giving a timeline and details, making her statement resemble testimony.

She spoke of her mental health issues following the abuse.

Stein ended with, “[Maxwell] needs to be in prison so all her victims can finally find peace.”

Judge Alison Nathan gave Maxwell the opportunity to speak. Other than one sentence during the trial, this is the first time she spoke in court.

Maxwell stood with two female U.S. Marshals standing behind her.

Speaking about her victims she said, “I want to acknowledge their suffering,” and “I empathize deeply with all the victims in this case.”

“It is the greatest regret of my life that I ever met Jeffery Epstein,” she said, and called him “a manipulative and controlling man.”

Maxwell turned to her victims and said, “May this day help you travel through the darkness into the light.”

Last week, Maxwell’s defense team filed two memorandums with the court asking for Nathan to be lenient in her sentencing, citing in one the 2003 guidelines the courts used before they were modified in 2004.

The prosecution responded with the reasons why the harsher, 2004 guidelines should be used instead.

There was quite a bit of debate between both sides prior to the victim impact statements, and ultimately Nathan chose to use the 2003 guideless, but with three enhancements included.

However, she did note that Maxwell took no responsibility for her crimes and included this in her decision.

Nathan informed the 60-year-old Maxwell of her right to appeal the conviction and the sentence.