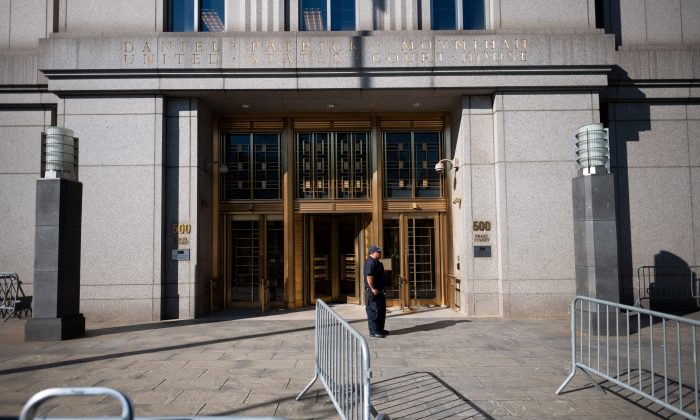 A policeman stands at the courthouse ahead of a bail hearing in U.S. financier Jeffrey Epstein's sex trafficking case in New York City on July 15, 2019. (JOHANNES EISELE/AFP/Getty Images)
US News

NEW YORK—Prosecutors revealed during a bail hearing on July 15 that federal agents uncovered “piles of cash,” diamonds, and an expired foreign passport inside a locked safe at Jeffrey Epstein’s Manhattan mansion.

The revelation came as U.S. District Judge Richard Berman said he needed more time and would wait until July 18 before making his decision on whether to grant bail to Epstein.

During arguments from the prosecution and the defense, Assistant U.S. Attorney Alex Rossmiller at one point told Berman what agents had discovered.

“Just this morning, the government became aware of a safe that contained piles of cash, diamonds, and a passport from a foreign country with a picture of the defendant under another name,” Rossmiller said.

Rossmiller also said the prosecution’s evidence against Epstein is “getting stronger by the day.” At a July 8 press conference, attorneys announced that the FBI was looking for more victims of Epstein to come forward.

Epstein owns and maintains “luxury properties and residences around the world,” a bail memorandum by the Southern District of New York said. These residences include locations in Manhattan, New York; Palm Beach, Florida; Stanley, New Mexico; and Paris. Epstein also has a private island in the U.S. Virgin Islands.

Epstein, who pleaded not guilty on July 8, has requested to be placed under house arrest at his mansion on Manhattan’s Upper East Side, with the addition of armed guards paid out of his pocket.

Prosecutors argued throughout the two-hour hearing that Epstein is a flight risk, and poses a danger to the community if released on bail.

The charges carry with them a maximum sentence of 45 years.

At the end of the hearing, two alleged victims of Epstein pleaded with Berman that Epstein remain behind bars until trial.

One of the victims, Annie Farmer, made her case with a trembling voice. She said Epstein was “inappropriate” with her when she was 16 years old. When asked by the judge to talk about her alleged abuse, Farmer said she preferred “not to go into details.”

Farmer argued that Epstein posed an “extraordinary risk of flight” and that he was dangerous.

The other victim, Courtney Wild, told Berman she was sexually abused by Epstein when she was 14 years old in Palm Beach.

“He’s a scary person,” Wild said, referring to Epstein, adding that he shouldn’t be allowed to walk freely in the streets.

Epstein’s lawyers said that their client has maintained a clean record for about a decade after he was sentenced in 2008 to 13 months in prison. In that deal, Epstein pleaded guilty to lesser state charges of soliciting and procuring a person under age 18 for prostitution. He also had to register as a sex offender.

The financier is currently being detained at the Metropolitan Correctional Center.

Martin Weinberg, one of Epstein’s lawyers, told the judge that he should be taken out of prison to better help his lawyers prepare their defense.

Berman criticized their arguments, saying that, according to their logic, all defendants should be treated the same way as Epstein.