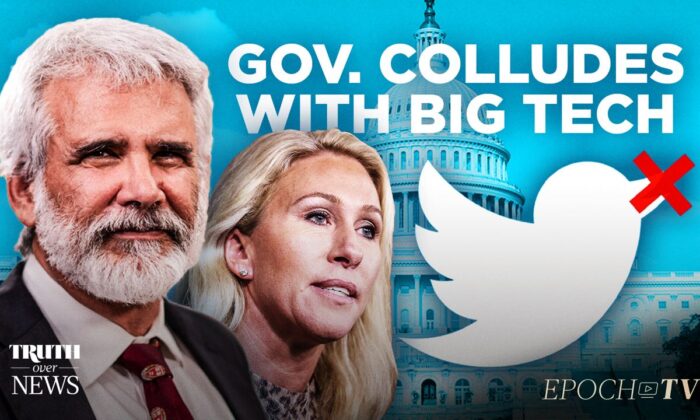 EpochTV Review: Who Is Monitoring the Monitors?

In this installment of Truth Over News, the hosts delve into the 1996 law named section 230. This law is designed to protect websites from being sued over what their users say. In light of this, social media companies should have no reason to ban certain people and shut down accounts because of differing opinions. This is the issue discussed in this episode and how our freedoms are being infringed upon.

Social media sites have begun to delete the profiles of people that they deem spread “misinformation.” The episode begins by giving the viewer two examples of this. Twitter banned the accounts of Rep. Marjorie Taylor Greene (R-Ga.) and the inventor of MRNA technology Robert Malone.

What is not clear is why the accounts were banned. Greene was told she gave misinformation about COVID-19 but the information she shared was directly from the Centers for Disease Control and Prevention. Malone was unable to determine which tweet of his caused the action.

Even former President Donald Trump had his account banned supposedly for posting that he would not attend the upcoming presidential inauguration.

These bans of prominent figures’ social media accounts is causing concern and questions about why it is happening.

The video begins by answering this question. Social media sites would not be able to operate without the protection of section 230. These companies will do anything they have to do in order to keep these protections, including helping the government to silence those who do not agree with mainstream ideas. This is a violation of people’s First Amendment rights.

Section 230 was enacted in 1996 to make websites exempt from legal action based on posts from members. A part of the Communications Decency Act of 1996, it provides limited federal immunity to providers and users of interactive computer services. Section 230 has been used in several lawsuits and has been debated frequently.

The host goes on to explain how the banning of certain people by social media companies who have ties with government and big business is an attempt to silence those with conservative viewpoints. These violations of First Amendment rights have even been affirmed by our own government. The Biden administration has openly stated that it is working with social media platforms to stop users from spreading what they deem as misinformation, and Facebook has declared its intention to help the government silence people by shutting down their accounts. Twitter has done the same.

While some feel that this type of censorship has valid reasons, it is against the First Amendment of the Constitution that states that “Congress shall make no law abridging the freedom of speech or the press.”

The framers of the Constitution saw the importance of an exchange of all ideas, even ones that differ from each other and may cause the other party to get upset. In order to have a free exchange of ideas, all opinions must have the opportunity to be heard.

Oliver Wendell Holmes further interpreted the First Amendment in 1919 when he stated speech could only be prohibited when it incites imminent lawless action. Having different ideas about COVID-19 vaccination or the origin of the virus do not fall within this definition as it is not illegal to choose whether or not get a vaccine or express opinions about how viruses originate.

In the next segment of the video, the host goes on to explain that this collusion did not start with President Joe Biden but began in 2012 during the presidential election when Facebook shared user data with the Obama campaign.

Another major example is related to the pandemic when Dr. Anthony Fauci and National Institute of Health Director Francis Collins were allegedly largely responsible for getting the financial news company Zerohedge suspended from Twitter. The reason? The outlet posted an article about the CCP (Chinese Communist Party) virus originating from a lab in Wuhan. A day later, its account was suspended.

Another example is the Great Barrington Declaration, which was drafted by a number of scientists and experts, calling for an end to widescale lockdowns and provide protection for vulnerable groups of people. It received 913,000 signatures before it was removed from Google’s search results. These are just a few examples. There are countless others of government and social media working together to suppress certain people and ideas.

The often-asked question then pops up. So, if we have a government which monitors our speech, then who is monitoring them? The host talks about this question.

Another question also comes to the forefront. Who is benefiting the most from this censorship?

Big Tech censorship keeps coming up as an issue with our politicians but nothing ever gets done about it. It can even go as far as to impact presidential elections. When Biden was running for president, social media sites suppressed stories of his son Hunter Biden’s alleged corruption. When CNN released information confirming the reports, Biden had already been declared the winner of the election.

Government Collusion With Big Tech Violates the First Amendment. Why Is No One Doing Anything About It? | Truth Over News [Full Episode]

To make this issue even more convoluted, several former White House officials have gained employment with these social media companies. These include Jim Baker, a former FBI official, and Miles Taylor who is a former Homeland Security official who has joined Google. Other members of the Washington elite are working for Big Tech social media companies as well as family members.

The host states, “In addition to financial incentives, the government has Big Tech exactly where it wants it in a dependent role whereby section 230 can readily be wielded as a heavy club should Big Tech ever inclined not to comply with the government’s wishes such as deplatforming certain individuals.”

The video ends with the host discussing how if section 230 remains as is, it will keep being used as an extension of the government to wield power and control over Big Tech to continue to violate First Amendment rights. It is time to address these violations and seek legislation that will do a better job of protecting them.

“Truth Over News” premiers every Tues. and Thurs. at 6 p.m.—exclusive on EpochTV.